Word processing was one of the most important applications for early microcomputers. WordStar, introduced in 1979 by MicroPro International, became the best selling word processor soon after it was introduced. According to the market research firm InfoCorp, WordStar was the most popular word processor in 1984 with 24% of the worldwide market1. 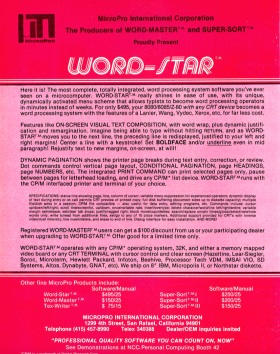 Advertisement for WordStar from the April 1979 issue of BYTE

WordStar was written by John Robbins Barnaby (usually referred to as Rob Barnaby) with assistance from Jim Fox. MicroPro began shipping the first version of WordStar in mid-19792.

Here it is! The most complete, totally integrated, word processing system software you’ve ever seen on a microcomputer. WORD-STAR really shines in ease of use, with its unique dynamically activated menu scheme that allows typists to become word processing operators in minutes instead of weeks. For only $495, your 8080/8085/Z-80 with any CRT device becomes a word processing system with the features of a Lanier, Wang, Vydec, Xerox, etc, for far less cost.

WordStar for Model I CP/M

The WordStar installer allowed users to customize the program for almost all types of CP/M computers. But MicroPro also sold versions customized for specific systems. Two of these were for the Microsoft’s Z-80 SoftCard CP/M add-on for the Apple II and for the TRS-80 Model I running CP/M.

WordStar for Model I CP/M required the installation of a CP/M add-on and wouldn’t work under TRSDOS, NEWDOS, or any other non-CP/M Model I operating system. The various TRS-80 CP/M add-ons, such as the Omikron Mapper and the Holmes VID-80, used this version.

The TRS-80 Model II and Model 4 could both run CP/M natively. Users of these machines could run the standard CP/M version of WordStar. Montezuma Micro CP/M was a popular way to run WordStar on the Model 4. 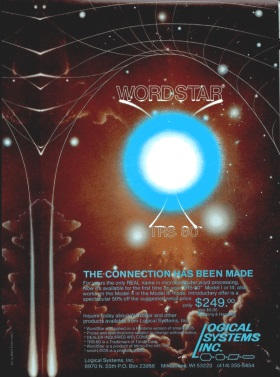 WordStar for the TRS-80

Several articles from 1980 refer to an upcoming Model I TRSDOS version of WordStar. One writer even mentions using a beta version. But if this Model I TRSDOS WordStar was ever developed, it was never released.

Here is an introduction from the April 1983 issue of The LDOS Quarterly:

WordStar is probably the most popular and most widely used word processing software in the world. Of course, WordStar has, to this point, never been available for the TRS-80 Model I or III user except under CP/M. Well, the wait is over. MicroPro, (the authors of WordStar), and LSI have now put together the ultimate in word processing packages for the TRS-80 Model I and III. WordStar is now available on smal-LDOS from both LSI and from MICROPRO. The package is provided on the LSI smal-LDOS operating system and will run on all LDOS 5.1.3 implementations, hard disk or floppy.

(smal-LDOS was a stripped down version of LDOS used for program distribution.)

WordStar was a CP/M program and was designed around CP/M. The TRS-80 version of WordStar dealt with that by converting all CP/M calls to their LDOS equivalents, essentially pretending to WordStar that CP/M was actually running. This meant that WordStar itself didn’t need to be modified from the official version. It also meant that WordStar behaved as though it were running in a CP/M environment. For example, filenames used the CP/M style such as A:FILENAME.EXT instead of the expected TRSDOS style FILENAME/EXT:0.

The TRS-80 version of WordStar could use the LDOS keyboard driver and spooler. Although it would run on the Model 4, it didn’t make any use of the Model 4 features such as a larger screen and more memory.

Despite its success on other platforms, WordStar for the TRS-80 never caught on. It probably didn’t help that the TRS-80 market had an unusual number of powerful word processors. Programs such as LeScript, Allwrite!, and Lazy Writer were as powerful, or in some cases more powerful, than WordStar. Logical Systems discontinued the TRS-80 version of WordStar in 1984. WordStar 4.0, released in 1987, was the last version to support CP/M.

I first came across WordStar on a user built machine running CPM in 1983 or so. When I bought my 1st Model 4 I bought a CPM operating system specifically to run WordStar in addition to DOS Plus 4 where I ran Allwrite. In 1987 I purchased the IBM version of WordStar and used it at the company I worked for to make my reports for the word processor ladies to convert the files into WordPerfect (which I, grudgingly, learned to use very proficiently and taught other people the tricks of that program). But I continued to use WordStar at home because of some of its unique editing capabilities. For me WordStar is the best TEXT EDITOR EVER FOR ANY PROGRAMMING LANGUAGE. PERIOD. END OF STORY. SIGN OFF ALL OTHER EDITORS.