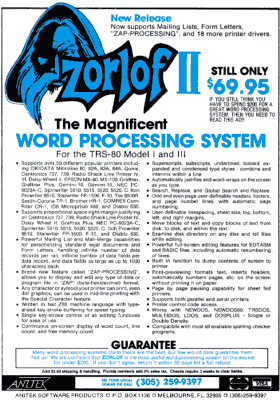 Anitek advertisement from the May 1983 issue of 80 Micro

The operator of ZORLOF is free to type continuously, never worrying about where to break the lines, or how the spacing between the words should be to achieve proper justification. ZORLOF does this all for you automatically, using its advanced WORD-WRAP and LINE JUSTIFICATION capabilities which match and even surpass those found on many of the higher priced word processing systems.

Zorlof continually updated an on-screen count of words and lines, giving an easy way to keep track of document lengths.

In addition to text files, Zorlof could also directly edit BASIC and EDTASM files. It could even renumber BASIC program files.

Zorlof had many powerful formatting features, such as the ability to have different footers on odd and even pages, that were not commonly found in consumer word processors. Unlike Scripsit, Zorlof had many character formatting features. On printers that supported it, it allowed underline, bold, italic, superscript, subscript, and expanded text. Zorlof supported over 50 printers and could use proportional justification on printers that allowed it, such as the Line Printer IV. Using special techniques, Zorlof could even print justified text on some dot-matrix printers that didn’t ordinarily support proportional justification.

Another useful feature was print preview, which displayed a document with text formatting and justification on screen. This provided a good way to save both time and paper.

Despite its power, Zorlof had two major problems with consumer perception:

In 1984, Anitek released a new word processor named LeScript. LeScript, which cost $129.95, was a major redesign of Zorlof. Unlike Zorlof, there were versions of LeScript for the Model 4 and other computers in addition to the Model I and III. Anitek continued to sell Zorlof as a lower cost alternative to LeScript.