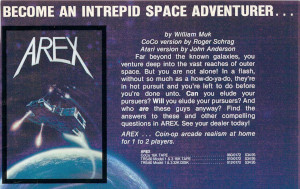 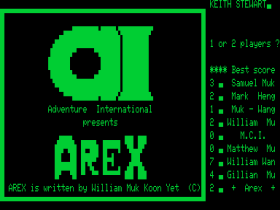 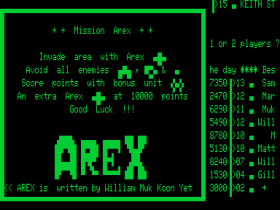 The TRS-80 version was the original, and all of the adaptations appear to have been released in 1983. Other than Sea Dragon and Time Bandit, Arex was the TRS-80 game that was adapted to the most computers.

The premise behind Arex is original, although it does share some similarities to the arcade games Blockade and Qix. The player commands a spacecraft (the Arex) which is represented by a plus sign. The ship can be moved anywhere on the screen, but leaves a visible trail which it cannot move through. The goal is to use the trail to cover free space to claim territory. A level is complete when 90% of the land is claimed. (The line below “Target Area” indicator at the bottom of the screen shows how much territory is left.) 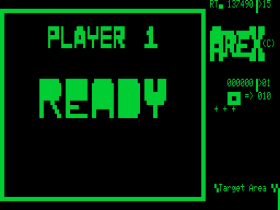 Start of the first level 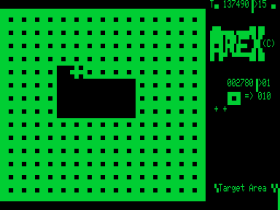 Arex is a deceptively simple game. Devising an effective strategy for covering area is very difficult. The player’s ship can’t move through its own trail, so boxing yourself in is very easy to do. The first level starts with a blank screen, but each subsequent level begins with a pattern already present. These patterns become more complicated as the game progresses and figuring out how to work around those patterns is the biggest challenge of the game. Skipping even a small amount of space around a pattern will make achieving the 90% coverage almost impossible. A 1983 review in 80 Micro stated “Arex requires that you develop a unique combination of skills. At times it teases you to be hasty, but patience and cautious planning are the keys to success.” 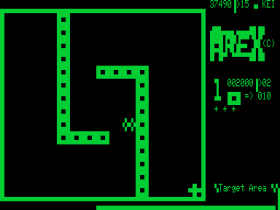 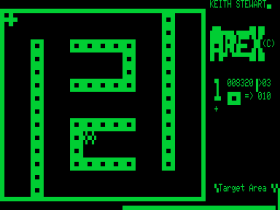 Start of the third level

Complicating any strategy for covering space are the three aliens: the Snarfs, the Snuffers, and the Diagons. The Snarfs are harmless and can be run over for extra points. However, if a Snarf remains on screen for too long, it changes into a Snuffer or Diagon. Snuffers move only at right angles and Diagons move only diagonally. Touching either is fatal to the player. The only way to deal with Snarfs and Diagons is to avoid them as much as possible or to box them in using the ship’s trail. Of course, boxing them in means additional space that can never be covered.

Another complication is that staying motionless for too long (such as when avoiding aliens) will cause the ship’s trail to start burning. The burning trail will eventually consume the ship. 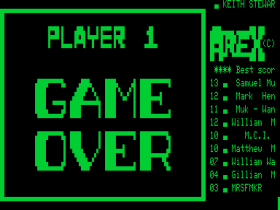 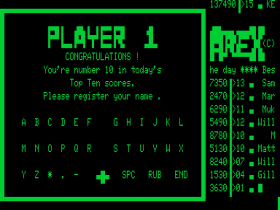 When Adventure International adapted their games for different computers, the resulting games tended to differ quite a bit from each other. (For example, the multiple versions of Rear Guard could have been different games.) Arex was unusual because the different versions I have tried feel very similar to the TRS-80 original. According to a 2009 interview with Roger Schrag, he created the Color Computer version for Adventure International by disassembling and manually converting the Model I/III version. It is an excellent job (lacking only the voices) and I don’t think most people would have guessed it was a conversion. John Anderson’s Atari adaptation improved the graphics and sound and added some nice touches (most notable the somewhat disturbing “Devil’s Head”), but kept the gameplay roughly the same.

I think that Arex is an excellent TRS-80 game, and it’s too bad it was released so late in the TRS-80 game market. It was a game that deserved more attention.