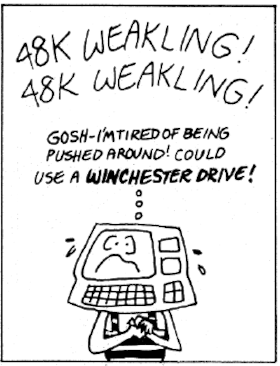 All of these computers cost between four and five thousand dollars, depending on the desired configuration. Each of the companies upgraded the memory to a full 48K and offered an upgrade of the processor speed from 2MHz to 4MHz. BT and Computex used the Holmes Sprinter2 speed-up kit, while MTI used their own speed-up. BT and Computex replaced the stock CRT with a Langley-St. Clair replacement. MTI used an “RCA equivalent slow-decay green-screen monitor.” All three had built-in fans and heftier power supplies. They also added 40-track or 80-track floppy drives.

But the real highlight of the upgrades was the hard disk storage. Each computer came with hard drives with sizes ranging from 5MB to 15MB. (These sizes are in megabytes, not gigabytes or terabytes. There are a thousand megabytes in a gigabyte and a thousand gigabytes in a terabyte.) All three of the systems ran DOSPLUS 4.0 for their operating system. DOSPLUS 4.0 was probably the TRS-80 operating system with the best hard drive support at the time.

For example, the computers from BT Enterprises came in three configurations:

Adjusted for inflation, these would range from eleven to twelve thousand dollars in modern money. The BT Enterprises advertisements told readers to stop in at any of their twelve dealers for a demonstration.

These “muscle micros” must have been impacted by Radio Shack’s introduction of the TRS-80 Model 4 on April 26, 1983. The Model 4 already featured many of these improvements, such as 4MHz speed and expanded memory, and was available directly from Radio Shack. Although no version of the Model 4 ever had a built-in hard drive, Radio Shack did offer external hard drives and later versions even had a very nice green screen CRT.

It’s amusing and somewhat sobering to realize that a $35.00 Raspberry Pi 3 has specifications which dwarf even the most powerful of the “muscle micros.”