DOSPLUS advertisement from the August 1980 issue of 80 Microcomputing

DOSPLUS was one of the most popular of the disk operating systems available for the TRS-80. Sold by Micro-Systems Software based in Hollywood (later Boca Raton), Florida, there were eventually versions of DOSPLUS for the TRS-80 Model I, Model III, Model II, and Model 4.

The people behind Micro-Systems Software were Larry Studdard, Mark Lautenschlager, Steve Pagliarulo, and later Todd Tolhurst. According to a 1981 interview in 80-U.S. Journal, DOSPLUS came about indirectly when they were writing software for Larry Studdard’s sheet metal business. Steve Pagliarulo developed a number of patches to TRSDOS to deal with bugs they had encountered. That experience led Pagliarulo to write his own TRSDOS-compatible replacement operating system, which became the first version of DOSPLUS. That original version was never publicly released and was used only with their business software.

In 1980, Micro-Systems Software introduced DOSPLUS 3.0, the first publicly available version of DOSPLUS, for $99.95. The name “DOSPLUS” presumably identified it as an improvement to the Radio Shack DOS or as “DOS Plus.” Although not actually the third version, it used a 3.0 version number to show that it followed TRSDOS 2.3. Advertisements described it as “the fastest, most reliable, and easy-to-use operating system available.”

Over the next two years, Micro-Systems Software enhanced DOSPLUS and released versions 3.1 through 3.4. (DOSPLUS 4.0 was a special version created to use hard drives.) DOSPLUS 3.3, in particular, became one of the iconic TRS-80 operating systems.

DOSPLUS 3.5, released in 1983, was the final version of DOSPLUS. It was a redesign of DOSPLUS with many new features, identified this way in an advertisement:

DOSPLUS 3.5 is the latest, and by far the crowning effort, in the DOSPLUS family of TRS-80 Disk Operating Systems. This system is the PREMIER Model I/III DOS. No other system even comes close. 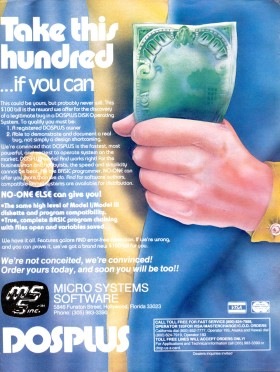 Micro-Systems Software described DOSPLUS 3.3 as “error free” and backed that up with an advertisement promising a reward of $100 for every bug found, stating “Take this hundred … if you can”:

We’re convinced that DOSPLUS is the fastest, most powerful, and easiest to operate system on the market. DOSPLUS works! And works right! For the businessman and hobbyists, the speed and simplicity cannot be beat. For the BASIC programmer, NO ONE can offer you more than we do.

In total, five rewards were paid to users: three for Model I DOSPLUS and two for Model III DOSPLUS. 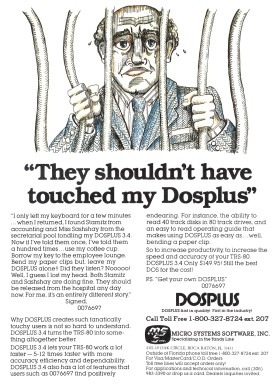 In addition to the Model I and Model III versions, Micro-Systems Software also developed versions of DOSPLUS for two other TRS-80 computers:

There was also a rumored version of DOSPLUS for the Lobo MAX-80, but I haven’t found any evidence that it was ever released.

Versions of DOSPLUS were considered for several other computer systems, including the IBM PC. This statement appeared in the May/June 1982 issue of the DOSPLUS News Information Center:

IBM DOSPLUS is only a matter of time. Look for us also on the Model 16. Any Z80 based microcomputer is fair game. DOSPLUS will be branching out.

Although Micro-Systems Software ported much of their TRS-80 software to the IBM PC, the proposed IBM PC version of DOSPLUS never became a reality. 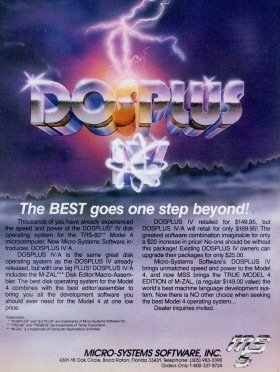 DOSPLUS IV advertisement from the January 1984 issue of Basic Computing

By 1985, development of DOSPLUS had mostly ceased. Unfortunately for the remaining dedicated DOSPLUS users, there was never any version of DOSPLUS that could handle file dates past 1988.

Micro-Systems Software moved on to writing software for the IBM PC and the Commodore Amiga. They created a number of popular Amiga programs, including the word processor Scribble! and the BBS-PC! bulletin board system (presumably an enhanced version of their BBS-80 bulletin board system for the TRS-80).

In 1986 Digital Research, Inc. acquired the DOSPLUS trademark from Micro-Systems Software, marking the absolute end of TRS-80 DOSPLUS. Although a completely unrelated product, Digital Research used the name “DOS Plus” for their CP/M-86 and MS-DOS 2 compatible operating system for many years.

The history of these old TRS-80 DOS’es is great stuff. Keep them coming.

I worked for Micro-Systems Software well after they stopped work on DOS Plus in the early 90s, when they were still doing Amiga stuff mostly though that was beginning to dry up also by then. Steve always remained proud of dos plus, and had a TRS-80 on display in the front lobby.

I still have the source code to DOSPlus 4.0, it was bought (around 85 I think) for use in a multi CPU point of sale computer system. I ported it over to the 64180/80180 based hardware and made many improvements to it over the years, mostly up until 91. some of those systems are still running. SCSI hard drives and up to 16 32MHz Z8s180 CPUs running terminals over RS232

One of those names in the article seems familiar to me…oh, yeah – Mark – my older brother. I occasionally worked for him at Micro-Systems – around 1979, when I was 11, I would get 10 cents a disk to make DOSPLUS disks for them. I did this at home, and could make $40 in a night or two, as I recall. But better than the money, I got the Model I to make disks with – 48K RAM, gold edge connectors, a Holmes speed up kit, and 4 (yes, 4!) disk drives (one for the master, 3 to make copies). And a green screen. Well, it was just green plastic stuck over the stock TRS-80 B/W monitor, but it looked cool, especially because I believe it had the “Computer Room” logo on it, which was the name of the retail arm of MSS, if you will – a single computer store in West Palm Beach. I think I probably used something Steve wrote to make fast copies. One summer (when I was around 14) I worked tech support. Besides phone calls, I’d actually answer letters – think about that. After listening to me speak to a customer (I’m pretty sure he heard a snotty 14 year old nerd) Larry gave me advice that I still remember today – to paraphrase him, “I have no doubt you’re very smart, just like your brother, but please try to speak to every customer as you would your church pastor”. Here’s the real kicker – a friend of mine who owns a little hot rod shop moved his shop to little commercial complex that contained the old Micro-Systems Software, and I don’t recall if I’ve determined yet (things are a little re-configured and he only has one bay) if it’s actually a bay that MSS used. It sure feels like it could be.