Unlike their other computers (the Model I, Model II, Model III, and Color Computer), the Pocket Computer wasn’t a Radio Shack design. It was actually a rebadged Sharp PC-12111, which had been introduced in Japan the same year. (At the time, the PC-1211 wasn’t available in the United States.) 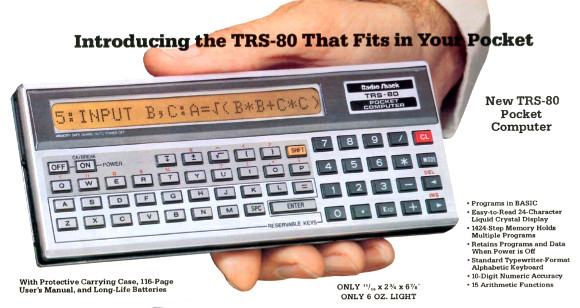 The Pocket Computer from a 1981 Radio Shack catalog

The Pocket Computer weighed only six ounces and measured 6 7/8" by 2 3/4" by 11/16", which meant that it really could fit in a pocket.2 It used two 4-bit processors3 and provided 11K of ROM (for BASIC) and 1.9K of RAM (for user programs). The display was a 24-character LCD that could show one line with uppercase characters only. Unlike a calculator, the Pocket Computer had a 57-key QWERTY keyboard, albeit somewhat reduced in size. The Pocket Computer was powered by four PX675 mercury4 batteries which provided 300 hours of use.

The biggest selling point of the Pocket Computer was the built-in BASIC. Program capacity was defined in steps, and the PC-1 offered 1,424 steps in its 1.9K of RAM. (Because of the small size of tokenized BASIC programs, this was actually a lot more capacity than it sounds.) Here is a description from a 1981 Radio Shack catalog:

You can program the Pocket Computer to do almost any of the smaller jobs that the TRS-80 microcomputer can do, except those requiring graphics capabilities. Program it to file a stock portfolio, or to calculate business, engineering, or scientific problems. Programs can be saved on cassettes (with the optional cassette interface and recorder), or left in memory for as long as needed.

In 1982, Radio Shack introduced the Printer/Cassette Interface (catalog number 26-3505) for $149.00 (later $127.95). The Printer/Cassette interface worked like the earlier Cassette Interface, but also included a printer that printed on 1 3/4" wide paper. It came with built-in rechargeable batteries which could print about 8,000 lines on one charge. Extra paper (catalog number 26-3506) for the printer cost $1.75 for six rolls.

Radio Shack also sold a few game packages, including Games I (catalog number 26-3515) and Games II (catalog number 26-3523) for $14.95 each. These included games such as NIM, Space Ship Landing, Treasure Hunt, Blackjack, Baccarat, and Craps. (Remember that all these games had to work within a 24-character display.)

Today, with ubiquitous tablets and smartphones, it’s hard to understand just how much of a technological innovation the Pocket Computer was. It is partly illustrated by this story from the January 11, 1982 issue of InfoWorld involving the science fiction author Isaac Asimov (who at the time was a Radio Shack spokesman):

At a recent photo session in New York city, someone from Radio Shack looked at the Pocket Computer that Asimov was holding and asked him, “How close is that to the computer you described in the first volume of the Foundation trilogy?” (The Foundation trilogy is Asimov’s seminal science-fiction masterpiece written in 1951.)

Asimov looked at the computer for several seconds, nodded his head and said, “This is it.”