Holmes Engineering advertisement from the December 1983 issue of 80 Micro

The Holmes VID-80 was a popular add-on for the TRS-80 Model I and III. Introduced by Holmes Engineering, Inc. in 1982, the VID-80 offered two related features:

The VID-80 used a video controller for the screen display, allowing it to switch the size to 80 by 24 and provide full screen reverse video. The larger size also increased the low-resolution graphics resolution from 128 by 48 to 160 by 72. The VID-80 also supported an 80 by 16 size, which was the highest the standard Model I monitor could display. Displaying a full 80 by 24 on a Model I required replacing the monitor.

The VID-80 came with 16K of its own memory. Upon startup, it copied the Level II BASIC ROM into that memory and patched it to support the 80 by 24 display. This allowed most Level II BASIC programs to work without alteration in 80 column mode. The patching could be disabled by pressing the 6 key upon startup.

The extra 16K of memory served a different purpose when running CP/M. That 16K, when combined with the 48K of the TRS-80, provided a full 64K for running CP/M programs.

The two versions of the VID-80 installed in quite different ways. The Model III VID-80 was an 8″ by 11″ circuit board which plugged directly into the Model III motherboard. Installation required no soldering or trace cutting, but involved removing the Z80 and character generator from the motherboard, plugging them into the VID-80, and plugging in the proper connecting cables.

The Model I VID-80 installed inside the Holmes Expansion Mainframe, Holmes Engineering’s own replacement for the Radio Shack Expansion Interface. The VID-80 consisted of two parts: an expansion module which plugged into two sockets of the Expansion Mainframe and a small circuit board that installed inside the Model I keyboard unit. Unlike the Model III VID-80, installation required cutting two traces and soldering two wires. The Holmes Engineering documentation advised:

This is a simple job IF YOU HAVE EXPERIENCE WITH SOLDERING. If you do not have much soldering experience, you should allow one of our dealers to do the installation for you. 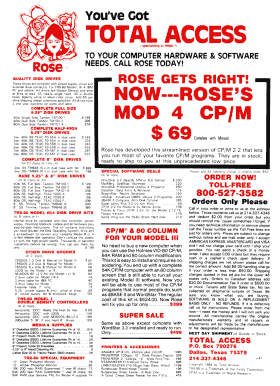 Total Access advertisement from the January 1985 issue of 80 Micro

In 1985, Total Access (a TRS-80 company owned by John Lancione) began advertising their own version of the Holmes VID-80 board. This version was manufactured by Aerocomp, another company owned by Lancione.

The Total Access VID-80 was only available for the Model III. Unlike the earlier version, it included both 64K of RAM and CP/M 2.2 as standard. It originally cost $399, but within a year they reduced the price to $299. Total Access also offered the VID-80 bundled with WordStar 3.3 (and original manuals) for $499, later reduced to $399.

Total Access advertised their Holmes VID-80 board until 1987. The VID-80 may have been available directly from Aerocomp for several years after that.