The TRS-80 Model 4, introduced on April 26, 1983, was the continuation of the TRS-80 computer line that began with the Model I in 1977. The Model 4 was officially launched for the press on April 27 at an event sponsored by the Boston Computer Society. 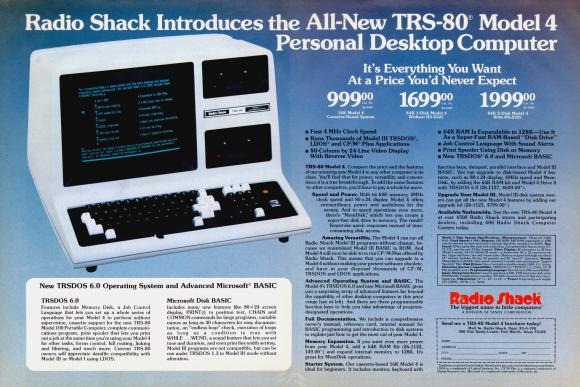 The Model 4 strongly resembled the Model III that it replaced. The most noticeable difference was the color: white instead of the battleship grey that dated back to the Model I. The Model 4 was compatible with Model III software and hardware but had extra features only available when running Model 4 software. Some of those new features included:

Although no version of the Model 4 included high-resolution graphics, it was always available as an option. Popular choices included the Model 4 High-Resolution Board from Radio Shack or the more common Model 4 Grafyx Solution from MicroLabs.

Early plans for the Model 4 had called for a detachable keyboard. The official reasons for its absence from the final product were given in a 1985 “Ask Tandy” column in 80 Micro:

The Model 4 doesn’t have a detached keyboard for two reasons. First, Model I owners wanted us to “put it all in one box and get rid of the cables.” Second, schools are big Model 4 customers and they prefer attached keyboards that can’t wander off.

The Model 4 was also originally designed to use the 16-bit Z800 microprocessor from Zilog. The Z800 was planned by Zilog to be Z80 compatible, yet capable of running new 16-bit software. That would have provided an ideal upgrade path for the Model 4’s future, but unfortunately Zilog never produced the part. Early versions of the Model 4 included a Z800 socket on the motherboard but the socket was removed in later redesigns.

Unlike the versions of TRSDOS for the Model I and III, Radio Shack contracted with an outside company to write the Model 4 operating system. Logical Systems (the authors of LDOS) created TRSDOS 6, regarded as one of the best features of the Model 4. TRSDOS 6 was a very powerful operating system, supporting advanced features such as device redirection, batch processing, and device filtering. It retained most of the commands and feel of Model I TRSDOS, yet added new features to use the improved hardware. Logical Systems also sold TRSDOS 6 under the name LS-DOS, and it was well known under that name.

Radio Shack introduced the Model 4P, a transportable Model 4, in 1984. The Model 4P was software compatible with the desktop Model 4, but could be transported in its own carrying case. The final member of the Model I/III/4 line, the Model 4D, was released in 1985. It came standard with double sided drives and was bundled with DeskMate integrated software.

The Model 4D made its final appearance in a Radio Shack catalog in 1990, although it could still be ordered from Radio Shack for some time after that. This meant that the Model 4D outlasted almost all of the original competitors to the TRS-80.

Have just enjoyed a pleasant hour browsing through your ever-expanding site. Good stuff!

Pity Model 4s are so rare here in New Zealand. I’d love to add one to my collection!

Ah, memories… my hotrodded Mod-1 (went through about TWENTY trips to Texas – they kept extending the warranty after each month or so it spent there — many times, I’d fire it up in the store when I went in to pick it up — it would lock up inside of ONE MINUTE of turning it on — and straight back it went. Mine was the third TRS-80 sold in my county in rural Michigan — I consider myself a paying ALPHA-tester, argh!

I cut my teeth on that thing — developed software to manage our wholesale camera repair shop — and ended up writing about VB programming after my health went in the toilet. (My health is now pretty much completely shot, and the industry has gotten so far away from me that I’d never catch up.)

My Model 1 gave up the ghost eventually — died under the knife, so to speak. The Mumford Micro clock-speedup kit was more than it could handle. The smoke didn’t come out, but the machine was definitely dead, for keeps. A pity. Ah, the memories of my IDS printer (sounding like an advancing army) banging off invoices and repair quotes… and the lower case mod I soldered in (piggyback 21L02 and some surplus calculator keys, and a driver that Dennis Bathory Kitz wrote) made “word processing” somewhat usable too.

We ran out and bought a Model 4, to be able to keep running our business — the power supply died shortly after the warranty expired, so I bolted in a big honker of a linear supply to the floor of the cabinet — worked great. Pulled out the two SS drives and installed FOUR 720K half-height drives (80 tk, DS/DD). Wow, SO much storage! :)

Those were the days. We’re really spoiled now.

I am still running a model 4P using dosplus IV

I was first introduced to the TRS-80 model III when I was in high school. I loved the TRS computers so much I bought a TRS-80 model 4 with dual disk drives just as they were being phased out. I still have this computer along with a tub load of software and it all still works. I recently took it out of storage and I was playing the old games once again. Ah memories.

My first introduction to programming was in laie 1982, 11th grade high school, on the TRS-80 Model I. I was introduced to a few statements and commands in a course called TRS/Data processing. But, in Science class room, the seniors were using the Model III. The teacher would let me come in for a little while after school to use the Model III. I ended up quitting high school that year, but I learned enough to get me interested in programming. I had start writing a Yahtzee game at that time. I used to go to Radio Shack and spend the entire day there working on my Yahtzee game on the Model III. I stayed there till closing time and I would do their daily report for them on that computer. I knew more about their computer than the saleman did. Customers would come and see me working on the computer and ask me what I was doing and I would show them what I was working on. And some of them would go home with a color computer under their arm for their children. I was about half way done writing the Yahtzee game when the Model 4 came out. There was no Hi Res Graphics installed on the Model III or the Model 4. I was using the ASCII charater set for graphics. I abandond my Yahtzee game on the Model III and started rewriting in on the Model 4. I continued to used the computers at Radio Shack until I could afford my own. As soon as the Model 4P came out, I bought one. I wrote several board games on my 4P including Yahtzee, Triple Yahtzee, Casino Yahtzee, Jackpot Yahtzee, Othello, Stay Alive, Battleship, Stratego, Overboard, Exit, connect 4, Qubic, Memory and more. A couple of few years later, I purchased the Tandy 2000 at half price from a computer center that was using it as a store system. It had the Hi Res Color Graphics. I abandond writing my games on the Model 4P and started rewriting some of the games onto the Tandy 2000. Some of the games I wrote on the Tandy 2000 was Othello, Overboard, Exit, Maneuver, Can’t Stop, Chase, Pente, Outwit, Tri-Trac, Connect 4, Qubic, Score Four, Steppe, Crosse, Kage, Kensington, Strata 5, Domain, Vis-a-vis, Avante, The Brain game From Autralia, Chinese Chess, Tac Tic Turn, Black Box, Input, Inside Moves and more.

I had two Model 4 units: one in the office and the other at home. Both of them were 128k. I remember that I switched from TRSDOS to NEWDOS (in fact I still have the floppies). Later, when I bought my first IBM-compatible computer I installed the app on it that could read and run most of the Tandy disks. As a college prof, I used to invite my students over to play games on it. They esp. liked the Decathalon game because it pitted two students against each other.