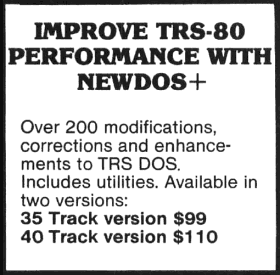 Portion of Apparat advertisement from the September 1979 issue of BYTE

NEWDOS 2.1, also known as NEWDOS, NEWDOS/21, and NEWDOS+, was the first alternative disk operating system for the TRS-80 Model I. Introduced in March 1979 by Apparat, Inc. of Denver, Colorado, NEWDOS jump started the entire third-party TRS-80 disk operating system market. NEWDOS was considered by many to be an essential program for the Model I; it is quite possible that NEWDOS was more widely used than Model I TRSDOS itself.

In mid-1978 when Radio Shack introduced TRSDOS 2.0, their first disk operating system for the Model I, it contained many bugs. Some were fixed by TRSDOS 2.1 later that year, but many bugs remained, some quite severe.

One of the first people to attempt to fix these bugs was Clifford Ide. He analyzed Model I TRSDOS in great detail and developed a set of patches to fix the bugs, increase performance, and add new features. This set of patches, originally known as APRDOS, was not a commercial product but was only available to those who knew someone who already had a copy.

Eventually the idea came about to sell the patched operating system as a separate product through Apparat, a company owned by Jim Lauletta. At the time, Radio Shack and others commonly referred to TRSDOS as just DOS. Dick Miller, of Miller Microcomputer Services, suggested NEWDOS as a name for the new product because the Apparat operating system was literally a new DOS, or NEW DOS. (A few early Apparat advertisements even referred to it that way, with a space between the words.) One of the earliest mentions of NEWDOS was in an April 1979 Apparat advertisement, which ends with this notice:

NEWDOS was described as having “over 200 modifications, corrections, and enhancements to TRSDOS” for a price of $99 for a 35 track version or $110 for a 40 track version. It also included a number of extra utilities, including an assembler (a modified version of EDTASM), disassembler, and Superzap, a very powerful file editor.

The NEWDOS documentation, although light on user instructions, did describe the changes made to TRSDOS in great, and sometimes entertaining, detail. Here is one example:

DOS SYS0,INIT initializes 4158-43FF and then, throughout subsequent system operation, never uses it, except for unexplained reference to 4359 in SYS1, a reference to 43C0-FF by SYS6 for ‘DEVICE,' and an unintentional reference to 43FFH as a result of instructions in SYS0, 46C1-CB. I have critical need for a DOS resident patch area. I will gamble that this area is truly available and use it.

Contrary to some accounts, Apparat never claimed that NEWDOS was completely original. The opening screen stated:

The manual clearly stated that the code was derived from TRSDOS:

A later manual elaborated on this point: 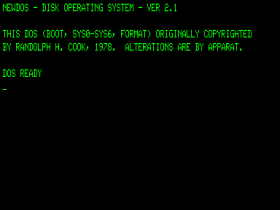 The TRSDOS part made a certain amount of sense, because at the time, Radio Shack’s floppy disk option for the Model I was the only choice available for TRS-80 owners. Because it came with TRSDOS, this meant that any potential purchaser of NEWDOS already owned a copy of TRSDOS.

Including a patched version of EDTASM made less sense, because EDTASM was a separate product with no connection to TRSDOS. There was no reason to assume that a NEWDOS purchaser already owned EDTASM. On the other hand, EDTASM would have been very difficult to use without any documentation at all.

Given that there was no dispute that NEWDOS appropriated TRSDOS code, why didn’t Radio Shack sue Apparat? It’s impossible to know for certain, but it might have been due to any number of reasons:

For whatever reason, Clifford Ide’s name was never used in connection with NEWDOS. The NEWDOS author was identified only as “Sam Jones,” a pseudonym used to “keep his privacy and avoid being swamped by phone calls,” according to an 80 Micro article. In Harvard Pennington’s book TRS-80 Disk and Other Mysteries, the NEWDOS principals (Lauletta and Ide) are described not by name but as “two guys in Denver.” In the acknowledgements to the book, Jim Lauletta’s name is listed in full (although not identified with Apparat) but Clifford Ide’s name is abbreviated as C.I.

Apparat kept the true identity of “Sam Jones” a secret until a 10-year TRS-80 retrospective article called “The Tandy Story” was published in the August 1987 issue of 80 Micro. That article incorrectly (and bafflingly) identified Roy Soltoff and William Schroeder (of MISOSYS and Logical Systems) as the original authors of NEWDOS1. In an effort to correct the record, Apparat finally revealed that Clifford Ide was “Sam Jones” and the author of NEWDOS.

Clifford Ide died in 2015. As far as I know, he never commented publicly about his involvement with NEWDOS.

The footnote to point one about dispute involving Randy Cook owning the TRSDOS copyright might point back to your good TRSDOS 2.1 article:

but include a note about the easter egg found here:

“In TRSDOS v2.1, run BOOT/SYS.WHO while holding down … the “R” and “V” keys (Randy Cook’s first two initials)” to get the following message:

Interesting. Thanks for publishing this. I worked at Apparat from 1981-1986 and remember Cliff and knew Jim Lauletta. My 1st PC was a Model 1 TRS-80 that I bought when a senior in High School.