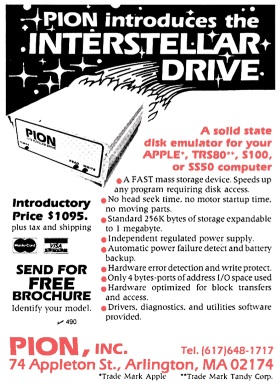 Pion advertisement from the February 1983 issue of 80 Micro

The Interstellar Drive, also known as Pion’s Interstellar Drive, was a solid state disk drive emulator that was sold by Pion, Inc.1 of Arlington (later Watertown), Massachusetts. It was introduced in 1982 for a base price of $1,095.00 for the 256K version.

Most modern solid-state drives use flash memory for non-volatile storage. The Interstellar Drive didn’t use flash memory, which had only recently been invented and wouldn’t become common for a decade. It also didn’t use bubble memory, which was another contemporary type of non-volatile storage. Instead, it used the same dynamic memory that was being used in computers to provide very fast data access.

Because the Interstellar Drive was a separate unit from the computer, its power supply could remain turned on even when the computer it was connected to was turned off. This was important because dynamic memory requires power to keep its data. To guard against data loss, the Interstellar Drive included a battery backup. The battery could preserve the memory contents for up to thirty minutes without power.

These high prices relegated solid state drives such as the Interstellar Drive to niche applications where performance was very important. Pion Inc. described the Interstellar Drive as being “designed with second-generation high-density 64K DRAM technology to provide fast mass storage that speeds up any scientific, educational, or business program requiring disk access.”