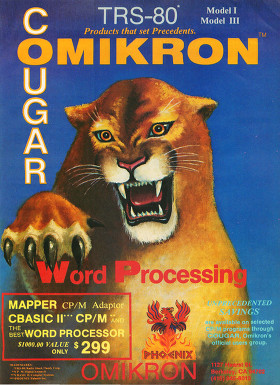 Omikron Mapper advertisement from the August 1981 issue of BYTE

The Omikron Mapper was the first (and probably most popular) CP/M hardware add-on for the TRS-80 Model I and Model III. It allowed unmodified CP/M programs to run on a TRS-80, something not normally possible. The Omikron Mapper was introduced in 1979 by Omikron Systems, a Berkeley, California company run by George Gardner.

Omikron Systems sold three versions of the Omikron Mapper from 1979 to 1984:

Both the Mapper I and Mapper III were available in 48K and 64K versions.

Because CP/M was a disk operating system, the Omikron Mapper required a TRS-80 equipped with floppy drives. This meant an Expansion Interface was required on the Model I.

The Omikron Mapper I and III boards were fairly small, measuring around four by six inches. Most estimates for installation time ranged from 30 minutes to one hour, and no soldering was required in almost all cases.2

Installing the Omikron Mapper II required one more step: adding a data separator chip inside the Expansion Interface. This could also be done with no soldering.

After installing the Omikron Mapper, the only visible changes were seen when starting the TRS-80. The Omikron Mapper would display a short message presenting two options:

The Omikron Mapper supported both CP/M version 1.4 and CP/M version 2.2. The Omikron version of CP/M 2.2 came with MBASIC (the Microsoft BASIC interpreter), a 250-page CP/M manual, and an MBASIC manual. It emulated the SOROC IQ120 terminal and could read “17 disk formats, including Osborne, IBM PC, Cromemco, Xerox, DEC, and Superbrain.”

Omikron CP/M came with a number of helpful utilities, including:

There were also Omikron specific versions of some CP/M utilities, such as STAT, PIP, and DDT.

Omikron heavily promoted Cougar, which they billed as “Omikron’s official users' group.” In addition to being a users' group with a newsletter called the OMIGRAM, Cougar was a type of buyers club. It was described this way in a 1983 advertisement:

With Cougar, Omikron can arrange to purchase CP/M software products at high volume discounts. This allows us to offer our customers surprising discounts on top quality software products. Over a year’s time, many of our Cougar members save hundreds of additional dollars on software purchases.

At around $199, the Omikron Mapper was cheaper than its primary competitors, the Parasitic Engineering (later Memory Merchant) Shuffleboard III (at $299) and the Holmes VID-80 (at $399).

Unlike the Holmes VID-80, which increased the text display size to 80 by 24, the Omikron Mapper maintained the 64 by 16 display size of the TRS-80. This caused problems with some CP/M programs which expected the more common 80 by 24 display size. Omikron advertised an add-on for the Mapper to expand the TRS-80 screen to 80 by 24. The advertisements said it would be “available 2nd quarter 1983” but I’ve never seen any indication that it was produced.

The introduction of the TRS-80 Model 4 in 1983 must have hurt sales of the Omikron Mapper. The Model 4 offered complete TRSDOS and CP/M support, along with an improved keyboard and an 80 by 24 screen. Omikron filed for Chapter 11 bankruptcy on February 11, 1984.

In February 2016, Ian Mavric released the Mappa-1, a powerful new CP/M add-on for the Model I that is software compatible with the Omikron Mapper. You can find out more on his Mappa-1 page.