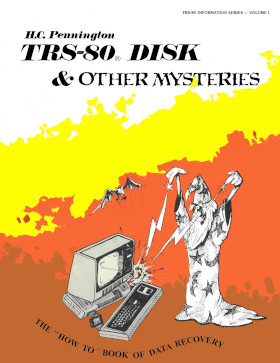 The TRS-80 Model I was less than two years old at the time, and Pennington had been one of the first purchasers. There was a great demand for TRS-80 information and Pennington wrote about many topics1 in TRS-80 Disk and Other Mysteries. These included using hexadecimal and binary, a discussion of TRS-80 disk operating systems, the TRSDOS directory structure, even Pennington’s opinions of Radio Shack. William Barden, Jr. described the contents in the preface to the book:

The book discusses how disks are organized, how space is allocated, how files are located on disk, and the tools that one may use to look at disk files and directories. Not only does it provide a general discussion of these topics, however, but it also gives clear information how to FIX disk problems such as lost files, Electric Pencil bugs and other snafus.

The probability that a given program will perform to expectations is inversely proportional to the programmer’s confidence in his ability to do the job.

One interesting detail about TRS-80 Disk and Other Mysteries is that it was an early book produced on a TRS-80 itself. The introduction states:

Pennington had worked for Hanna-Barbera and the many illlustrations in the book were his. I’ve seen the style and contents of TRS-80 Disk and Other Mysteries described as “personal” and “idiosyncratic.” I think any reader’s reaction to the book depends a lot to how much they like that approach. For example, although one letter writer to 80 Microcomputing complained about the book’s “semiliterate style”, others praised it heavily. One wrote, “Harv did a masterpiece of communicating a technical and complicated subject in a refreshing and informative way.” Another wrote, “I never thought that so much information could be stuffed into a book that size.”

IJG, Inc. left the jewelry business entirely to focus on computer books, leading to sales of more than $3 million by 1983.