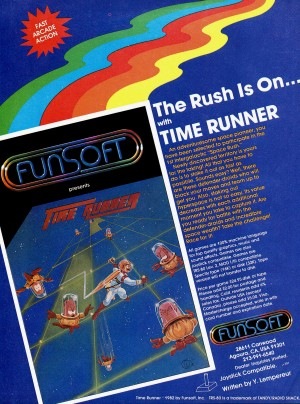 Funsoft advertisement from the February 1983 issue of 80 Micro

Time Runner is a TRS-80 game written by Yves Lempereur, the seventh of nine games that he wrote for the TRS-80. It was inspired by Amidar, an arcade game created by Konami in 1981.

There was also a ColecoVision version of Time Runner announced and advertised in 1983, but that version was never actually released. Further complicating the issue, the Amiga game Time Runner, released by Red Rat software in 1989, appears not to have been related to the Funsoft game.

Here is a description of the TRS-80 version from a Funsoft advertisement:

An adventuresome space pioneer, you have been selected to participate in the 1st intergalactic “Space Rush.” Newly discovered territory is yours for the taking! All you have to do is to stake it out as fast as possible. Sounds easy? Well, there are these defender-droids who will block your moves and team up to get you. Also, staking out hyperspace is not so easy. Its value decreases with each additional moment you take to capture it. Are you ready for battle with the defender-droids and incredible space wealth? Take the challenge! Race for it! 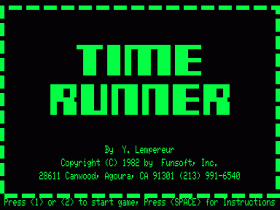 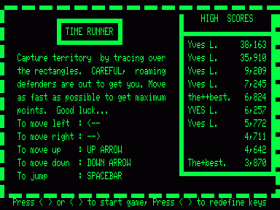 Time Runner is separated into levels called “phases.” The goal in each phase is to enclose each square on screen. Tracing over a dotted line changes it to a solid line, and filling in all four sides encloses a square.

There is only a limited amount of time to complete each phase, but the creatures that roam the screen are more of a problem. Touching one results in the loss of a life, but avoiding them isn’t always possible. The only option then is a “jump,” which turns the creatures upside down and makes it briefly possible to move past them. The number of jumps available are limited so they must be used sparingly. 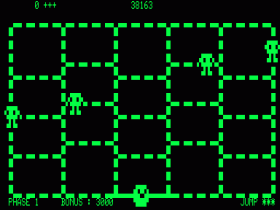 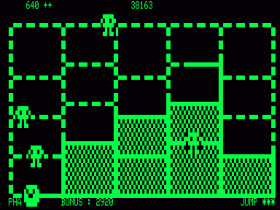 Phase 1 is described as a “rush” screen, but Phase 2 is a “countdown” screen. It plays the same as the first phase, but with one important difference: the point value of each square is displayed within the square. But to make things more difficult, each point value starts a countdown after three sides of the square are filled. This makes it especially important to target the high value squares first and adds difficulty to the game. 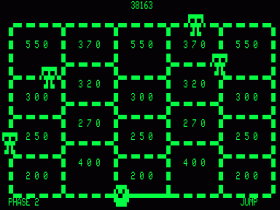 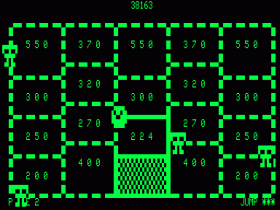 One square is captured

Unlike most games adapted for other computer systems, both the Commodore 64 and Atari 400/800 versions of Time Runner feel almost identical to the TRS-80 original. The Atari version, also written by Yves Lempereur, is particularly close. All three versions even share the same selection of music. 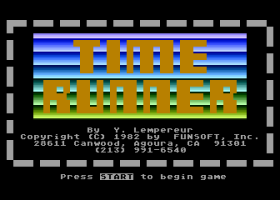 Title screen on the Atari 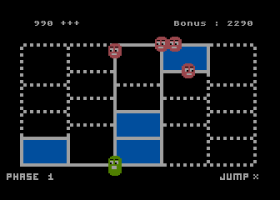 Phase 1 on the Atari 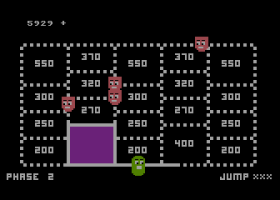 Phase 2 on the Atari 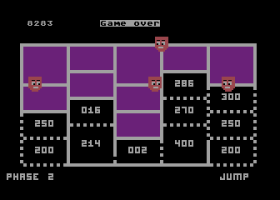 Game over on the Atari 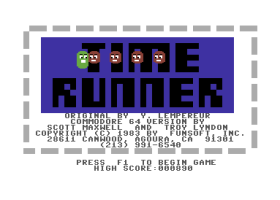 Title screen on the Commodore 64 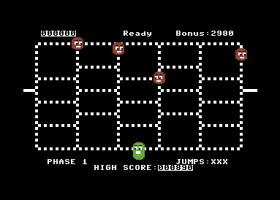 Phase 1 on the Commodore 64