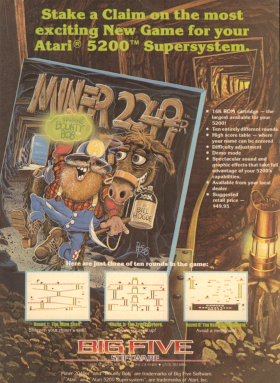 Finally, a game to really show off the huge potential of your Atari 400/800. You control the legendary “Bounty Bob” in his quest to conquer the futuristic mine shaft. Mutant aliens lurk around each of the ten stations. A full 16K of ROM is utilized to bring the screen such innovations as the Transporters, Slides, Pulverizers, and the Cannon. Unbelievable graphics and sound bring this game to life. A multi-page instruction manual is included to completely explain all the many game features.

What made Miner 2049er different was both the number and similarity of the ports. Bill Hogue wrote the original Miner 2049er for the Atari 400/800. Barry Friedman of International Computer Group (ICG) licensed the game to various companies to produce versions for other computers. These licensed ports of Miner 2049er were nearly identical to the original. The exact number is hard to determine, but some of the major versions included:

Oddly, some lists of Miner 2049er ports do include a TRS-80 version. (Barry Friedman even mentioned it in a 2001 interview.) Some of this confusion probably stems from an August 1983 article in Electronic Games magazine titled “Bounty Bob – Computer Star.” At one point, that article states:

Right now “amazing” might also be the word to describe the variety of systems offering a version of Miner 2049er. That list included: the Atari 2600 and 5200, the Odyssey2 and ColecoVision videogame units, hand-helds and table-top devices and computer software for Atari, Apple, Panasonic, IBM, Texas Instruments, Timex/Sinclair, Commodore and three Radio Shack computers.4

I have seen many mentions of a TRS-80 Color Computer version of Miner 2049er, but one doesn’t seem to have ever been developed, much less released. However, Big Five Software did work on a port for the TRS-80 Model I/III. According to an interview I conducted with Bill Hogue in 2008, Kelly Bakst was writing the TRS-80 version. On his website, Bill Hogue said that they “developed a version for the black and white TRS-80 computers but never released it.”

It’s not hard to understand why the TRS-80 version of Miner 2049er was never actually released. Both Miner 2049er and Weerd (Big Five Software’s last TRS-80 game) were released in November 1982. I’m sure that the sales of Miner 2049er for other systems dwarfed anything that would have been possible for the TRS-80. In the September 1983 issue of 80 Micro, Bill Hogue described Big Five Software as having “officially left” the TRS-80 market, saying “If we hadn’t come out with our Atari game at the time we did, we probably would have gone out of business.”

There was one other minor TRS-80 connection to Miner 2049er. One of the games inspired by Miner 2049er was Manic Miner, by Matthew Smith, which was an enormous success on the Sinclair ZX Spectrum. According to a 1984 interview with Smith in Personal Computer Games magazine, he wrote Manic Miner on a TRS-80 Model 4 with a five megabyte hard drive, saying “It’s more efficient like that … because the Tandy and the Spectrum both have the Z80 processor, and there’s no waiting for loading and saving.”