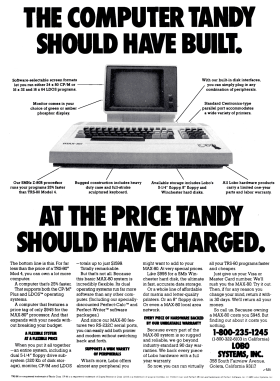 Lobo Systems advertisement from the December 1983 issue of 80 Micro

The Lobo MAX-80 was a TRS-80 compatible computer sold by Lobo Systems (originally known as Lobo Drives International). Introduced at the 1982 National Computer Conference (where one could be reserved for a $100.00 deposit), the MAX-80 offered an impressive array of features including:

There was a great deal of interest in the MAX-80 and articles about it were published in all of the TRS-80 magazines. A MAX-80 Users' Group, MAXIMUL, was formed which published a newsletter devoted to the MAX-80.

Unlike other TRS-80 compatibles, such as the PMC-80 or the LNW80, the MAX-80 wasn’t hardware compatible with the TRS-80. It shared some hardware characteristics, such as memory-mapped keyboard and video. But there were many differences from the Model I and Model III, including different disk hardware, no cassette support and no BASIC in ROM. As a result, no self-booting TRS-80 disks would work on the MAX-80, whether they were operating systems or games.

In many respects, the MAX-80 had more hardware similarities to the Model I than the Model III. But in terms of software compatibility, the MAX-80 was based on the Model III. According to some estimates, 95% of all Model III software (excluding games) would work unmodified on the MAX-80. Games were a separate problem because they usually relied on direct hardware access and the slower TRS-80 speed. Almost all major TRS-80 software packages were compatible, and Logical Systems sold a $10.00 patch disk of fixes for those that exhibited problems (such as VisiCalc and Scripsit).

Much like the earlier Lobo LX-80 Expansion Interface, the MAX-80 required a special version of LDOS to run TRS-80 programs. Lobo Systems offered two different operating systems for the MAX-80:

There were two other MAX-80 operating systems available from third parties:

There were also plans for a MAX-80 version of DOSPLUS, but I haven’t found any evidence that it was ever released.

All that was required to make a complete system was a monitor and disk drives. Many types of standard monitors could be used and Lobo Systems sold a 12″ monitor for $175.00. They also sold a variety of disk drive units, including:

With its 5.07 MHz processor, the MAX-80 was one of the fastest microcomputers available at the time. Although its lack of graphics and color deterred some, it remained an attractive choice for those who wanted both CP/M and LDOS compatibility. However there is little doubt that the introduction in 1983 of the TRS-80 Model 4, a 4 MHz computer which offered both CP/M and complete Model III compatibility, must have dampened interest in the MAX-80.

In 1985, Lobo Systems announced a new computer called the Mini Max. It was a $795 transportable computer designed to compete with the TRS-80 Model 4P. I don’t know if any were produced, and both Lobo and the Max-80 disappeared soon after.

MAXIMUL and their MAX-80 newsletter both outlasted Lobo Systems, ending only in 1989. MaxDOS also remained available until at least 1988.

This is the computer I most regret not having today! I owned one of these fine machines in the 1980’s, and came from a TRS-80 background, but this was the time period that I was working in CP/M and the Lobo became my main machine. I had dual DD DS 8" drives, as well as multiple 5.25" floppies, but never a hard drive.

I remember falling asleep to the clicking and whirring of the drives, and the blinking of the LEDs as some big job was running. I wrote some very good code on that machine, and it is not going too far to save I loved it. Like the Velveteen Rabbit, I put it aside as I moved into the world of the PC, and I actually remember that for awhile I had two, and now I have none, but I do not remember how I parted with it.

I would love to have one again, with the eight inch drives, and all, but I have never seen one for sale. The Max-80 was a great computer, LDOS was a fine operating system, and I have been very fond of other computers I have owned in the 25 years since then, but this might have been the one, the single best machine ever.

Wow – this site brings back memories. I was in high school (or the equivalent) in England and since I couldn’t afford the TRS-80 I had a Video Genie. A far east copy of the hardware that ran all these games and other software.

I can’t believe that I’d forgotten Starfighter… I played that game for hours and it held my imagination as much as any game since.

Thanks for the site :)

From the original Small-C article in Dr. Dobbs Journal I was able to create a port to the TRS-80 using Zilog mnemonics and the Microsoft Z80 assembler. I did most of the work on my Max-80 and later moved up to James Hendrix’s Small-C v.2. I also had CP/M 3 when it came out, but I found a free Z-80 source CP/M clone called ZDOS and managed to get that running, to which I added a free Z-80 assembler I found published in a book. Topping it all off with a small screen-oriented text editor I wrote in Small-C gave me a complete system, entirely in source code. Those were the days!