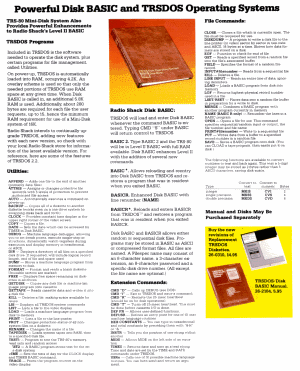 TRSDOS from a Radio Shack catalog

TRSDOS consisted of a command shell and a Disk BASIC with extended features. Unlike many other computers at the time, the Model I was designed to support floppy drives as a future option. The Level II ROM booted from a floppy disk if available, and the ROM BASIC included special hooks to support Disk BASIC commands.

The design and code of TRSDOS (with the exception of Disk BASIC) was the product of Randy Cook. Shugart, the company which was manufacturing floppy drives for Radio Shack, recommended Cook as an expert in floppy disk interfacing. According to a 1981 interview with Randy Cook, Radio Shack paid him a flat fee of $3,000.00 for developing TRSDOS.

TRSDOS has been heavily criticized over the years, but there are several important points to remember:

After the release of TRSDOS 2.1, Randy Cook parted company with Radio Shack and created another operating system, VTOS, which he sold through his own company. This means that Randy Cook had an important influence on all of the major TRS-80 operating systems: