Electric Pencil (also known as The Electric Pencil) was the first word processor written for a microcomputer. The original version was created by Michael Shrayer and released for the MITS Altair in December 1976. The TRS-80 version was released almost two years later and it dominated the market until the introduction of Scripsit.

Electric Pencil was one of only five pieces of software inducted into the 80 Micro Hall of Fame in 1983, with the panel stating that Electric Pencil “demonstrated conclusively that a TRS-80 could be used for serious word processing, and was the model for later word processors.” 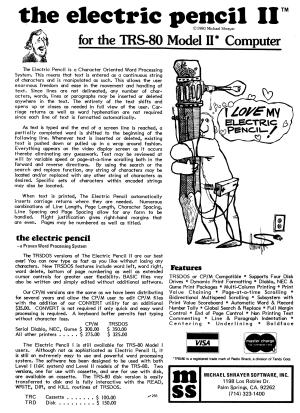 Michael Shrayer purchased an MITS Altair computer kit after seeing the January 1975 issue of the Popular Electronics. He later expanded his Altair with a paper punch, video display, and keyboard and he began writing machine language programs.

Shrayer decided he didn’t want to use a typewriter to write the documentation for ESP-1 but to use his Altair instead. There were no suitable programs available, so he decided to write his own. As he stated in an 1984 article in Creative Computing:

The new Electric Pencil program was unlike anything else available, and there was great demand for the program. Shrayer began selling it through his company, Michael Shrayer Software, Inc. Peoples wanted versions for computers other than the Altair, and 78 different versions were created for different computers and operating systems by 1980.

The popularity of Electric Pencil made it an early target for software pirates. By one estimate, ten copies were pirated for every legitimate copy sold.

Electric Pencil for the TRS-80 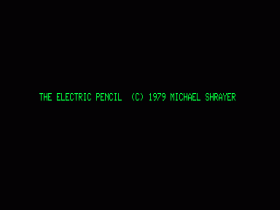 Electric Pencil was adapted in 1978 to the TRS-80 Model I by Small System Software. The price was $150.00 for the disk version and $99.95 for the cassette version (with both Level I and Level II versions on the same tape). It was enormously successful, becoming the dominant TRS-80 word processor.

The Electric Pencil advertisements promised a number of features:

Somewhat unusually, there were two recommended hardware modifications in the TRS-80 Electric Pencil manual. They were: 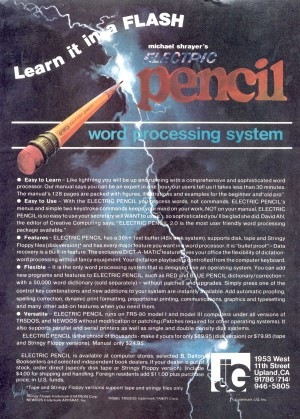 IJG advertisement from the September 1982 issue of 80 Micro

Another new product released by IJG was an IBM PC version of Electric Pencil, written by Dale Buscaino and Scott Daniel of Progressive Software Design. IJG sold that product to Electric Software Corporation in 1986, which continued to advertise it for several years. 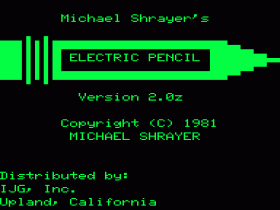 The original version of Electric Pencil had a powerful impact, influencing almost all word processors that followed it. I think that this quote from the original manual best exemplifies the attitude behind Electric Pencil that helped make it so successful:

Knowing full well that instruction manuals can be rather tedious, this one was assembled with ease of application as its main criteria. This text is not intended to be a course but rather a guide to the proper operation of The Electric Pencil Word Processing System. Within a few hours, anyone can certainly start using The Electric Pencil and in less than a few days can be expert at it. It is assumed that the reader is familiar with a standard electric typewriter keyboard. THE BEST WAY TO LEARN TO OPERATE THIS SYSTEM IS TO USE IT!!! Trying all the commands and experimenting with different combinations as well as discovering the most efficient ways to do things will really pay off.

I remember travelling to a medical meeting held at the Palmer House snazzy hotel in Chicago only a short time after the word processor Electric Pencil had come on the market. I lived in the RTP “sophisticated” area of North Carolina (Raleigh Durham Chapel Hill) and had one of the earliest Radio Shack Model I Trash 80’s ‘micro-computer.’ I had bought it to save money on rewrites with co-authors of scientific papers for medical publication. Even then at a dollar a page, one of my more fussy perfectionitistic co-authors was driving me nuts and depleting my budget with her rewrites. I had only vaguely heard of work processing in 1980 and only knew that you could type a correction or addition at the first of a manuscript or anywhere in the manuscript for that matter and the entire manuscript would be reformatted and one would have to print out the finished product once! I searched the country over, calling computer shops long distance to find this program only to find that one of the few places that carried it outside of California was in Chicago. I remember taking a taxi to the store while on break from the meeting at the hotel and grabbing and purchasing the last copy of the program the shop had. It was packaged in a plastic baggie and did not look too fancy and the manual was almost mimeographed and stapled together. My wife was outraged at the cost. But once back home, I loaded it into the 5 1/4" drive off the disk and voila it worked as billed and my typing and writing woes were miraculously solved. Fortunately the construction of the formatting controls of the program seemed to make immediate sense to me and thereafter I became a fan of WP software ever since. Thanks to Michael Shrayer wherever he may be now.

I brought my TRS-80 to Stevens Point Wisconsin university, when I attended as a freshman in 1979 (maybe 1980). I had the ONLY pc on campus….in my dorm room. Professors and students came to my room, just to see it. I wrote software for it, every chance I had. It wasn’t long before I was buried with term papers, and Electric Pencil came out. I bought a copy right away, and started typing my own term papers, as well as term papers for others, for 50 cents a page. I typed heads-down, but other students would stand near me and watch the screen, just to see the “word wrap” feature…everyone thought that was the coolest. The IBM-PC and Wordstar, finally ended the reign of Electric Pencil.