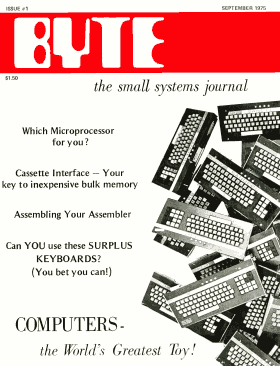 BYTE grew out of 73 magazine, an amateur radio magazine created by Wayne Green. As amateur radio operators, the readership of 73 was quite technical and interested in the rapidly advancing field of microcomputers. Wayne Green described the situation in an article titled “How BYTE Started” in first issue of BYTE:

Between my professional need to understand computers and my amateur interest in the subject I found myself subscribing to one newsletter after another… talking at exhaustive length with computer savvy 73 readers… reading books… and wearing computer salesmen out. I discovered an interesting thing—few of the hardware chaps could talk software—and vice versa. Further, neither could talk much about applications.

There ought to be a magazine covering the whole thing, thought I. A magazine which would help the neophyte to grapple with programming languages… would permit the beginner to build microcomputers and peripherals… would provide a dialog for the more sophisticated to communicate as well. How about a publication which would cover all aspects of small computer systems?

Carl Helmers, the publisher of ECS Journal, was selected as the editor of BYTE and the first issue was assembled in just seven weeks at a “220 year old colonial mansion” in Peterborough, New Hampshire.

Despite Wayne Green’s listing as publisher in the first four issues of BYTE, the magazine was published by Green Publishing, which was owned by Virginia Londner Green, his ex-wife. Explanations for this unusual arrangement vary, but what is clear is that Wayne Green was gone from BYTE by the January 1976 issue. The split was not amicable and hard feelings remained on both sides for many years.

Wayne Green founded Kilobaud Microcomputing in January 1977 as competition to BYTE. He later started many other computer magazines including 80 Microcomputing, the most famous TRS-80 magazine.

Virginia Londoner sold BYTE to McGraw-Hill in 1979, although she remained publisher until 1983. 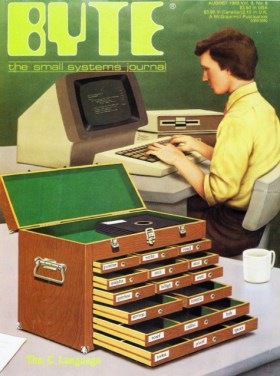 Unlike most computer magazines, which ended up focusing on only one system, BYTE remained multi-platform until the end. But even during the height of the TRS-80’s popularity, BYTE always seemed to me to be rather light on TRS-80 coverage compared to other systems it covered.

One of the most popular columns in BYTE was “Ciarcia’s Circuit Cellar,” which ran from 1977 to 1988. Created by Steve Ciarcia, “Ciarcia’s Circuit Cellar” published a number of hardware designs for different computers, including the TRS-80. Some of these were later sold as products by Micromint, including the Micromint E-Z Color color graphics interface and the Micromint Disk-80 Expansion Interface.

Although BYTE began as a very technical magazine with article titles such as “Recycling Used IC’s,” “Write Your Own Assembler,” and “Build a Graphics Interface,” it became much less technical as the years passed. In the later years it focused primarily on news and reviews, although at a technical level that was still probably higher than most other publications.

Many BYTE covers used the distinctive work of the artist Robert Tinney. His covers were used from late 1975 to 1986 and gave the magazine a unique and recognizable look.

In 1998, CMP Media bought BYTE from McGraw-Hill, along with several other magazines. Despite strong readership figures (circulation was estimated at 500,000), CMP Media unexpectedly shut down BYTE soon after the purchase. BYTE was relaunched as a web publication in 1999. That version, generally regarded as a pale shadow of the former magazine, ended in 2009. In 2011, United Business Media relaunched BYTE as an online publication, an experiment which ended in April 2013.