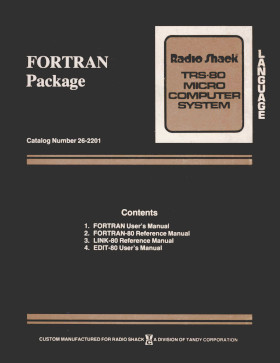 Front of the TRS-80 FORTRAN manual

FORTRAN1, whose name derives from FORmula TRANslator, predated the TRS-80 by several decades. It was developed at IBM starting in 1954 by a team led by John Backus, with their first FORTRAN compiler in 1957 for the IBM 704. Before FORTRAN, writing a program for a mainframe computer almost always meant using assembly language. FORTRAN became the first widely used high-level programming language back when computer programs were written on punched cards.

After other manufacturers of mainframe computers, starting with the UNIVAC in 1961, developed their own FORTRAN compilers, FORTRAN became the first cross-platform computer language. A program written in FORTRAN, especially after the language was standardized as ANSI standard X3.9-1966 (better known as FORTRAN 66), could run on any computer with a compatible compiler.

FORTRAN resembled BASIC (which was based on FORTRAN), but with its own specific formatting rules. These were largely due to FORTRAN initially being used with punched cards, which enforced a certain structure. For example, here is the sample program from the Microsoft FORTRAN manual that will display a table of Fahrenheit and Celcius conversions:

Microsoft released the FORTRAN-80 compiler for the TRS-80 Model I in December 1978. The FORTRAN-80 compiler, which had already been available for CP/M since July 1977, cost $350.00 and required 32K of memory, an Expansion Interface, and a floppy drive. (These were pretty steep hardware requirements at the time.)2 T. Dettman said in his review of Microsoft FORTRAN in the March-April 1979 issue of 80-U.S. Journal:

… FORTRAN is so deeply ingrained in Engineering and Science that it promises to be around for years to come. What’s more, FORTRAN programs have been developed to do nearly anything that one could want to do with a computer. These routines are often available in various books and other publications. My own library of programs has several hundred routines accumulated over many years of programming large computers. Now I can use them directly on my TRS-80 without translation on BASIC.

Microsoft FORTRAN included MACRO-80, their Z80 macro assembler. MACRO-80, and its accompanying tools (LINK-80, EDIT-80, and CREF-80) were popular enough that Microsoft sold them separately as the TRS-80 Assembly Language Development System for $175.00. 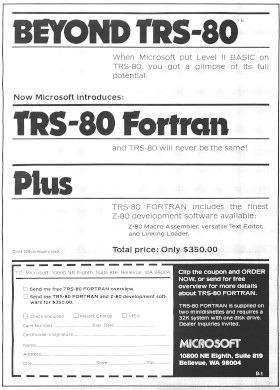 Microsoft advertisement from the January 1979 issue of BYTE

Radio Shack introduced their version, sometimes called TRS-80 FORTRAN, in 1979. Here is the announcement in the November 1979 issue of the TRS-80 Microcomputer News:

Now available for TRS-80 Model I (32K with Disk) is a complete FORTRAN package which conforms to the American National Standard FORTRAN language described in ANSI document X3.9-1966, with a number of language extensions and restrictions. The FORTRAN package includes FORTRAN-80, EDIT-80, LINK-80, and LIBRARY – everything you need to create, compile, and execute FORTRAN programs on your TRS-80.

Radio Shack’s version of Microsoft FORTRAN for the Model I cost only $99.95, but lacked the MACRO-80 assembler and the CREF-80 cross reference utility found in Microsoft’s full version.

Radio Shack also sold FORTRAN 77 (catalog number 26-6451) for $699.00. This ran under XENIX, Microsoft’s version of UNIX that was used on the Model 16/6000. FORTRAN 77 was the ANSI standard that followed FORTRAN 66, but wasn’t completely compatible with it. This FORTRAN doesn’t appear to have been produced by Microsoft.