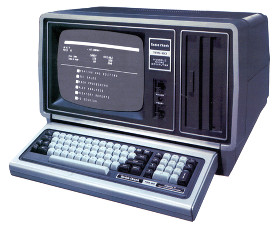 The TRS-80 Model II from a Radio Shack catalog

The TRS-80 Model II was the first in the line of Radio Shack business computers that eventually included the Model 16, Model 12, and Tandy 6000. It was introduced at the June 1979 National Computer Conference1 in New York City. Radio Shack began taking orders that month for delivery in October, shipping 1,000 Model II’s by the end of year.

Differences from the Model I

After the introduction of the Model II, the TRS‑80 Microcomputer System (introduced in 1977) retroactively became known as the Model I2. Radio Shack saw the Model II as addressing a different market than the Model I:

While Model I3 will continue to fulfill many needs (in some cases it may even be better suited), some of you need more storage, power, and speed than Model I can offer. Rather than stretch the limits of Model I, we decided to meet those additional needs by designing and building a completely new, faster and more powerful computer … TRS-80 Model II.

Model II does not replace Model I, rather it’s a new family member, picking up where Model I approaches upper limits of expansion.

We will not be able to accept “trade-ins” of Model I’s for Model II’s. 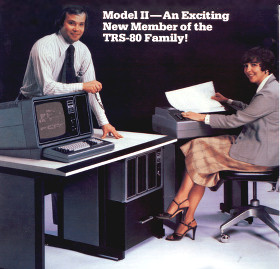 Another Model II image from a Radio Shack catalog

The Model II was more powerful than the Model I:

These specifications were quite competitive with other business computer systems, as a Radio Shack catalog pointed out:

Radio Shack sold a wide range of business software for the Model II, including:

They also offered some very specific business software, such as:

Radio Shack sold development software and general applications for the Model II, usually for prices much higher than the equivalent Model I versions:

Radio Shack’s move into the business market was quite successful and profitable. It was frequently noted that the average Model II purchase (and accompanying software and peripherals) usually ended up costing around ten times more than the average Model I purchase. In 1980, Radio Shack established a leasing program for businesses to help them deal with the costs.

The Model II was discontinued in 1983 after Radio Shack introduced its replacement, the Model 12.