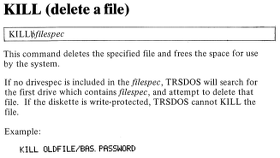 Entry for the KILL command in the Model I TRSDOS 2.1 manual

A political terrorist kills a hostage. A TRS-80 owner kills a file. You might sense there’s something wrong with our language when we use the same word to describe such disparate events.

Those with objections to KILL could always install unofficial patches to change it to something less objectionable like ERAS or REMV. In fact, the previously mentioned article “Thou Shalt Not Kill” included patches to do this for many TRS-80 operating systems.

Many of the earliest computer operating systems, which predated microcomputers by decades, didn’t support any file deletion commands. This was because they used punch cards, paper tape, or magnetic tape. A file deletion command only makes sense when dealing with a random-access storage system that supports deleting a file, such as a disk system.

DELETE was the most common command to delete a file for most of the mainframe and minicomputer operating systems I have examined. Here are a few examples:1

When microcomputer operating systems were introduced, they followed a similar pattern. Here are a few more examples:

Model 4 TRSDOS was the only version of TRSDOS that didn’t use the KILL command. As a review in the October 1983 issue of Creative Computing stated:

Someone must have felt that the KILL command, for deleting specified files from the disk directory (to free the disk space for other uses) sounded too blood-thirsty. In TRSDOS 6.0, this function is now called REMOVE. But KILL still exists in Model 4 Disk Basic.

Roy Soltoff, the “primary designer of the TRSDOS 6.0 operating system” (also known as LDOS 6.0), gave his reason for the change in the April 1983 issue of the LDOS Quarterly.:

The last thing to mention for now is that there is no KILL command in LDOS 6.x. I have persevered in my quest to make the system less violent. The command to get rid of unneeded files is “REMOVE”.

The KILL command was only used by three major systems: Datapoint DOS, TRSDOS, and Microsoft BASIC.

Since the commands in TRSDOS strongly resembled Datapoint DOS, its use in TRSDOS isn’t that surprising. But it’s also possible that it derived from TRSDOS Disk BASIC, which was written by Microsoft and also contained the KILL command. (The hook for KILL was present in Level II BASIC.) It could be that the KILL command came to TRSDOS through both Datapoint DOS and Microsoft BASIC.

The first Microsoft BASIC with a KILL command was the original Altair Disk BASIC6, which was written by Bill Gates himself in February of 1976. Microsoft’s MS-DOS Technical Reference Encyclopedia, published in 1986, gives this account of what happened:

That’s when Gates, who was still a student at Harvard, flew to Albuquerque, checked into the Hilton Hotel with a stack of yellow legal pads, and asked not to be disturbed. Five days later, he checked out of the hotel, yellow pads filled, and started typing code into a DEC PDP-11 mainframe, on which time was leased from the Albuquerque school system. After five days, Disk BASIC was up and running on the Altair.

As far as I know, Bill Gates has never said what he used as a model for Altair Disk BASIC. It’s quite possible that he was inspired by Datapoint DOS for some aspects of Disk BASIC commands and operation. TRSDOS Disk BASIC was very similar to Altair Disk BASIC and kept its KILL command.

I cut my teeth on systems running TRSDOS, LDOS, VMS, PWB/Unix, and AT&T System V release 2, 3, and 4. I didn’t remember killing files in TRSDOS, though. Thanks for the reminder!

Your site, trs-80.org, is a work of art. Thank you so much for all of the time, research, and care you put into each and every post.