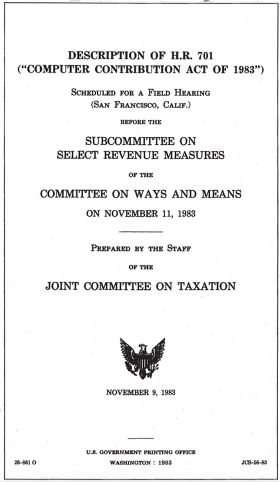 Either way, both companies were heavily involved in the education market. At the time, 25% of Apple’s revenue came from educational sales. Both companies had compelling reasons to get their computers in schools and build their brand awareness among schoolchildren. Beyond those reasons, people at both companies felt that computers in schools were important to the future. In a 1995 interview with the Smithsonian Institution, Apple co-founder Steve Jobs recalled his plan to make that happen:

We wanted to donate a computer to every school in America. It turns out that there are about a hundred thousand schools in America, about ten thousand high schools, about ninety thousand K through 8. We couldn’t afford that as a company. But we studied the law and it turned out that there was a law already on the books, a national law that said that if you donated a piece of scientific instrumentation or computer to a university for educational and research purposes you can take an extra tax deduction. That basically means you don’t make any money, you lose some but you don’t lose too much. You lose about ten percent. We thought that if we could apply that law, enhance it a little bit to extend it down to K through 8 and remove the research requirements so it was just educational, then we could give a hundred thousand computers away, one to each school in America and it would cost our company ten million dollars which was a lot of money to us at that time but it was less than a hundred million dollars if we didn’t have that. We decided that we were willing to do that.

In 1982, Steve Jobs met Representative Fortney “Pete” Stark (D-California)1 and discussed this idea. As a result of the meeting, Apple’s director of taxes, Michael Rashkin, helped draft the bill which Stark introduced as the “Computer Equipment Contribution Act of 1982” (H.R. 5573) on February 23, 1982. It became much better known as the “Apple Bill.”

Steve Jobs said that if the bill was passed, Apple was committed to donating $200 million of computer equipment to 75,000 schools. Apple estimated that after tax deductions, it would end up paying only around 8% of the total cost of the donated computers.

According to the bill, any donated computer needed be less than six months old and have:3

The bill also stated that video displays, printers, and disk drives were eligible for the deduction, but only if connected to a donated computer.

With little outside support (other than Apple) and opposition from the National Education Association, most observers were surprised when the “Apple Bill” passed the House of Representatives on September 22, 1982 on a 323 to 62 vote. It was then reported to the Senate on October 1, 1982, but the Senate adjourned without taking any action.

Radio Shack, along with many other groups, had opposed the bill. They pointed out that a company could receive the deductions without donating any software for the computers, any teacher training, or even a functioning computer. They also had objected to the large percentage of the tax deduction. Any deduction based on retail value instead of manufacturing cost would obviously favor companies (such as Apple) with very high profit margins. In testimony, they stated:

But whatever the precise cost, there is no doubt that a 200 percent tax deduction will amount to little more than a massive subsidy of one of America’s most profitable industries at a time when the nation faces huge budget deficits.

Stark resubmitted the bill as the “Computer Contribution Act of 1983” (H.R. 701) in the 98th Congress the following year. But this time, it had some competition. There were six other computer donation bills in the House and Senate that term.

Unlike the “Apple Bill,” Wright’s “Tandy Bill” added specific requirements for computer specifications and training. Three of the notable requirements were:

The most prominent alternative to the “Apple Bill” and the “Tandy Bill” was a compromise bill introduced by Senator John Danforth (R-Missouri) called “Technology Education Assistance and Development Act of 1983”6 (S.1194). Perhaps because there were so many competing bills, none of them passed or even made it out of committee, not even the “Apple Bill.”

Apple had better luck in California with a bill introduced by Assemblyman Charles Imbrecht that passed on September 29, 1982. It gave a 25% credit on California taxes for the fair-market value of computer donations made between January 1, 1983 to June 30, 1984. Under the terms of that bill, Apple ended up donating around 9000 computers to eligible school districts in California.