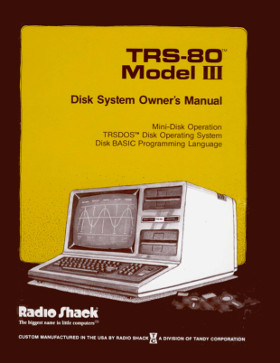 The TRSDOS operating system includes the software and input/output functions needed to operate the TRS-80 Disk System. TRSDOS allows vast storage space, expanded file manipulations, and much quicker access time than you get with tape storage.

Although somewhat slow, Model III TRSDOS is reliable and (at least in its last versions) bug-free. It includes a Disk BASIC which is compatible with Model I Disk BASIC, and can run almost all the same programs.

One nice feature of Model III TRSDOS is file dating, which was lacking in Model I TRSDOS. One strange quirk was that the month and year of the file date are stored, but not the day.1

The original Model III TRSDOS was released with the Model III, which was introduced on July 30, 1980. This was followed by several major releases in quick succession with the final major update, TRSDOS 1.3 (identified by a May 1, 1981 date2), released in early 1981. TRSDOS 1.3 was a significant release that incompatibly changed the disk format from TRSDOS 1.2.

TRSDOS 1.3 had a number of minor updates (including the infamous “Rummy Buzzard” release) until its final update in 1984. The name TRSDOS 1.3 became synonymous with Model III TRSDOS.

Radio Shack developed one more version of Model III TRSDOS, which would have been known as TRSDOS 1.4, but it was never completed or released.

Model III TRSDOS supports most of the documented function calls of Model I TRSDOS, but not all. Many of the most important calls are at different locations than on the Model I. This was especially frustrating for software authors at the time because there didn’t seem to be much reason for the changes. It made it difficult to write complicated machine language programs that would work on both the Model I and Model III.4 On the other hand, most BASIC programs worked without alteration.

Many people wondered why Radio Shack created a new version of TRSDOS (with the accompanying incompatibilities) instead of just modifying the existing Model I TRSDOS. I have seen three reasons given:

My guess would be that all three were factors. Radio Shack didn’t make the same mistake when they introduced the TRS-80 Model 4. The Model 4 was 100% compatible with all Model III programs.

Unlike the Model I TRSDOS disk format, which required only minor alterations to support hard drives, the Model III TRSDOS disk format was tightly tied to single-sided, 40 track floppy disks. There were third-party patches to support 80 track drives, and even some to treat the second side of a floppy as another drive. But it’s hard to see how Model III TRSDOS could have been expanded to support hard drives. Radio Shack obviously felt the same way; when they introduced their Model I/III hard drive packages in 1982, they used LDOS from Logical Systems, not TRSDOS, as their official hard disk operating system.

Model III TRSDOS had a built-in PATCH command, and almost everyone who used TRSDOS ran a heavily patched version. Radio Shack published a number of official patches in their TRS-80 Microcomputer News newsletter.

But many of the patches were created outside of Radio Shack. Two of the biggest collections were by Andy Levinson in his articles “Patch Works” and “Patch Works II: The Sequel” published in the January and August 1985 issues of 80 Micro. Another large collection was by David Goben in his “Visit With David Goben” column in Computer News 80. Many of these patches drastically changed TRSDOS by speeding it up and altering the behavior of commands.

The most extensive TRSDOS patches were included in the SYSTEM 1.5 package written by Gary Campbell and sold through GRL Software of Kelowna, British Columbia, Canada. SYSTEM 1.5 maintained complete compatibility with TRSDOS, while improving performance, adding new commands, and supporting the extra features of the TRS-80 Model 4.