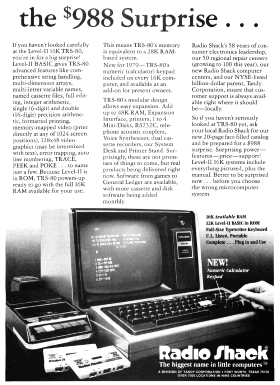 Model I Level II BASIC advertisement from the January 1979 of BYTE. The price for a 16K Level II Model I dropped to $849.00 in a matter of months.

A Level II BASIC is now being developed. This will be a 12K BASIC with every feature you ever imagined — PEEK and POKE, PRINT USING, transcendental functions, advanced string handling, etc. It should be available on ROM soon.

Level II BASIC for the Model I was based on the same code as Extended BASIC and was remarkably similar. In a 1981 interview with 80-U.S. Journal, Bill Gates described the design of Level II BASIC:

It’s a hybrid, in between Extended and 8K. For example, there are no user defined functions or short error messages; two features typically in Extended. But there are PRINT USING and double precision variables, which aren’t found in 8K BASIC. The additional data types were one of the key things we wanted to get. So we took that as given and pared it down to cram it into the 12K.

He also said that Microsoft’s work on Level II BASIC took “about four weeks from start to finish.”

Level II BASIC retained most Extended BASIC features, such as PRINT USING, double-precision and integer variables2, and IF—THEN—ELSE. Some other features, such as user defined functions, long error messages, and INSTR, were removed but reappeared later in TRSDOS Disk BASIC. Only a few commands, such as ERASE, SWAP, and HEX$, disappeared entirely. Level II BASIC also added some commands, such as SET, RESET, POINT, and INKEY$, that were not present in Extended BASIC.

Here’s a description from a 1979 Radio Shack catalog:

Unfortunately, Level II BASIC also introduced the problem of keybounce. There were four revisions of Model I Level II BASIC. The most significant was the version 1.3 revision, which fixed the keybounce problem.

We set the standard

Microsoft’s motto at the time was “We set the standard” and as one 1979 Microsoft advertisement put it: “The largest-selling microcomputer systems use software by Microsoft.” For example, the Commodore PET 2001, the Apple II4, and the Radio Shack TRS-80 all (eventually) used Microsoft BASIC in ROM. Microsoft BASIC was one of the few standards in the early microcomputer industry and most of the implementations were quite similar. As the introduction to the book Microsoft BASIC Decoded and Other Mysteries (which contained an analysis and disassembly of the Model I ROM) pointed out, “Although you may find that the code is organized differently in your Heath or Sorceror, the routines are, for the most part, identical!”

Other TRS-80 operating systems, such as MULTIDOS, DOSPLUS, and LDOS, included their own Disk BASIC interpreters not derived from TRSDOS Disk BASIC. Although mostly compatible, these interpreters added additional features and usually used less memory.

Microsoft wrote one other BASIC version for the Model I called Level III BASIC. It was originally sold by GRT Corporation and had the distinction of being the first Microsoft program sold directly to consumers. Level III BASIC was available for cassette and Exatron Stringy Floppy users only, but it served much the same purpose as TRSDOS Disk BASIC.

Model III BASIC was 14K long, 2K longer than the Model I Level II BASIC. The extra 2K was used for a lowercase driver, time and date commands, and several other features.

The TRS-80 Model 4 was completely Model III compatible, but also could run its own more advanced version of TRSDOS. The BASIC included with Model 4 TRSDOS was derived from MBASIC, Microsoft’s implementation of BASIC for CP/M. Although both were written by Microsoft, MBASIC differed quite a bit from Altair Extended BASIC. Converting a program from Level II BASIC to Model 4 BASIC was usually not a trivial undertaking.

Another good article. Thanks.

I’d like to see a list of commands unique to different BASIC languages — something like a key when looking at a BASIC listing that might help quickly determine which system that BASIC code was designed to run on.

Model 4 BASIC was a very powerful BASIC. It supported up to 40 character variable names and some nice commands like WHILE/WEND. Unlike Level II BASIC, it required spaces after each keyword. It also required a THEN statement after each IF. It didn’t support SET, RESET, or any of the cassette commands. There were programs sold that could do a simple conversion, but a programmer really needed to do the final steps.