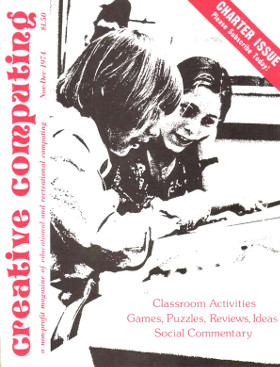 Cover of the first issue of Creative Computing in 1974

After unsuccessful attempts to obtain funding from educational foundations, Ahl decided to publish Creative Computing using his own money. He mailed out 11,000 flyers to promote the magazine and received 850 subscriptions in response. Here is a description of the magazine from an early subscription form:

Creative Computing is a lively new magazine for students and teachers using computers in colleges, junior colleges, secondary schools, and even the lower grades. It contains games, simulations, problems, exercises, curriculum materials, and idea directly usable in the classroom.

The first issue of Creative Computing (November/December 1974) was published in October 19741. With the early issues, Ahl pursued an interesting strategy. Instead of printing only enough copies for the 800-plus subscribers, he printed 8,000 copies and mailed the remainder to schools and libraries around the country. Those extra copies helped build interest in Creative Computing and he continued the overprinting for the next three issues. 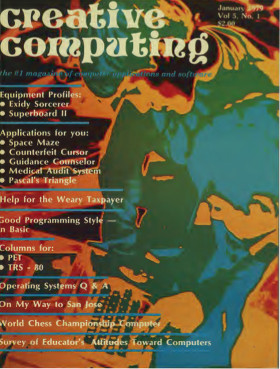 Cover of the January 1979 issue of Creative Computing

Creative Computing took a slightly different direction after the MITS Altair 8800, one of the first hobbyist computers, was introduced in January 1975. Ahl felt that microcomputers like the Altair might be a good choice for schools (rather than the minicomputers in use at the time), and Creative Computing began publishing articles for hobbyists. It also began publishing more games, including the famous Hunt the Wumpus in the September/October 1975 issue.

The November/December 1976 issue was the first printed on coated stock (rather than the newsprint of earlier issues) and the first to accept advertising. By 1978, the subscriber base was two-thirds hobbyists and one-third educators and this was reflected in the article topics.

One of the most popular features of Creative Computing were the columns devoted to individual computers. The first of these columns began in the November/December 1978 issue:

Two other columns were added later:

One of my favorite parts of Creative Computing were the articles, reviews, and columns by John J. Anderson, at the time Associate Editor of Creative Computing. He had a very engaging writing style and was my favorite computer writer of the era. In between permanent columnists, he wrote quite a few installments of the columns “Apple Cart,” “Commodore’s Port,” and “Outpost: Atari.” His tragic death in 1989 was a great loss to the computer world. 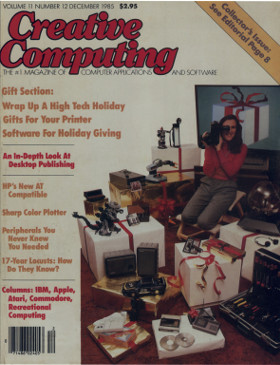 Cover of the final issue of Creative Computing in December 1985

By 1981, Creative Computing circulation had reached 120,000. David Ahl sold Creative Computing to Ziff-Davis Publishing that same year. Ziff-Davis kept Ahl as Editor-in-Chief and mostly retained the same feel for the magazine, although with more emphasis on business. The largest issue ever published was December 1982 at 430 pages

Creative Computing continued to be successful as a general computer magazine at a time when most other magazines were narrowing their focus to one system: the IBM PC. Oddly, it was this very success which led Ziff-Davis to end Creative Computing. It was thought that only machine-specific (meaning IBM PC-specific) magazines would be capable of large subscriber growth in the future. From their press release announcing the decision:

In the last two years, the microcomputer market has become increasingly segmented and business-oriented, and the market for large circulation, general interest microcomputer magazines has failed to expand.

The final issue of Creative Computing was December 19853. David Ahl’s final editorial, titled “Great While It Lasted,” had this to say about the end:

Creative isn’t the first magazine to disappear, and it certainly won’t be the last. In a sense, the demise of various computer magazines simply reflects what is happening to the industry as a whole.