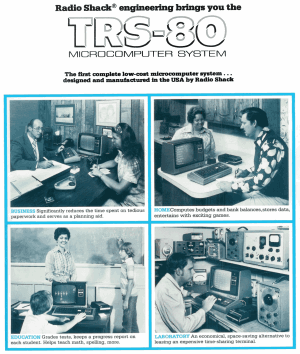 August 3, 2013 marks the 36th anniversary of the introduction of the Radio Shack TRS-80 Microcomputer System, a significant date in the history of personal computers. The TRS-80, later known as the TRS-80 Model I, was one of the first mass-marketed, fully assembled computers and it dominated the early microcomputer market.

One of the first computers available to the public was the MITS Altair 8800, introduced in early 1975. The Altair was a primitive machine by modern standards; it had no display or keyboard (although these were made available later) and programs were entered using toggle switches on the front panel. It came with no memory and extra memory was expensive. Despite these limitations, the Altair was a real computer and was quite popular.

Don French purchased an Altair soon after they were introduced. He managed a Radio Shack store at the time and he used the Altair for inventory control. When he later became a buyer for Radio Shack, he could see the enormous potential for a Radio Shack computer product. He began working on a microcomputer design during his own time. After some time working on his design, French approached John Roach, who had recently been put in charge of manufacturing, with his idea. Roach was interested, but any new project would need approval from top executives.

In many ways, Radio Shack was uniquely positioned to sell computers to a broader market. The 1975 Radio Shack catalog identified Radio Shack as “the world’s first and only billion-dollar company specializing in retail consumer electronics.” With 11 million customers at over 3,000 stores, it had a larger base of potential customers than most other companies considering a computer product.

But in other ways, it was a poor fit. Any computer would have to be priced in the hundreds of dollars. At the time, the median price of an item in a Radio Shack store was $29.95. Also, Radio Shack was very conservative when it came to selecting products. This meant that it rarely took big risks, but also rarely suffered big losses. Any computer project would definitely qualify as a risk.

French’s computer idea probably wouldn’t have gone anywhere if Charles Tandy hadn’t heard about it. Tandy, the head of Tandy Corporation (parent company of Radio Shack), thought that Radio Shack needed to develop some new products. He heard indirectly about French’s idea and gave his approval for it to be developed further.

A little while later, Roach and French were in Silicon Valley for an unrelated project. They visited National Semiconductor to look at their SC/MP microprocessor and met Steve Leininger, a talented National Semiconductor engineer who had his own ideas about microcomputer design. Leininger impressed both Roach and French with his grasp of the problem and Roach offered him a job. A few months later, Leininger and his wife moved to near Radio Shack headquarters in Texas.

The original plan was to sell an inexpensive computer kit to be assembled by the customer. But concerns about whether customers could assemble such a complicated kit changed the plan to selling a fully assembled computer.

After some initial delays, Steve Leininger began creating a design for a computer based on the concepts that Don French had developed. Despite his work at National Semiconductor, Leininger didn’t want to use the SC/MP processor. The two best 8-bit processors available for the target price appeared to be the Motorola 6800 and the Intel 8080. He created designs for each processor, but still wasn’t completely satisfied. His preference was for “something a little more elaborate”: the Z80, a fairly new processor created by Zilog. But each Z80 cost around $200, which seemed to rule it out for a low-priced system. Leininger contacted Zilog anyway, and Zilog offered a surprisingly low price.

Leininger created a prototype of the computer, wire-wrapping it himself on six Radio Shack breadboards (he described this construction stage as a “one-man show”). The prototype used a modified television for the display and a standalone keyboard for input.

The Demonstration for Charles Tandy

On February 2, 1977, the prototype computer was demonstrated to Charles Tandy. His call for new products had advanced the project over the objections of his subordinates and it needed his approval before it could ever enter production.

Steve Leininger described the prototype in a September 1977 talk to the San Diego Computer Society:

We breadboarded the thing up with the dynamic RAM’s and essentially Li-Chen Wang’s BASIC with our I/O drivers added. We had all these boards in a little card-edge assembly, screwed under the back end of a table. We had one of the modified televisions and our keyboard on top of that plastic case, and that’s when we showed it to Mr. Tandy. He came in, and I don’t think he realized we had everything under the table.

One of the programs demonstrated was a dummy tax program jokingly dubbed “H&R Shack.” When prompted for a salary, Tandy typed in 150,000. The program crashed because the BASIC in the prototype only supported 16-bit integer data types. It couldn’t represent a number as high as 150,000. After French and Leininger explained the problem, Tandy typed in a lower salary and the program worked as described. French decided at that point that the final BASIC had to support floating point math.

According to people who were there, Tandy gave no clues about his decision during the demonstration. But after it was all over, he explained that he had already leaked details about the project to the press. It was now approved and the next step was production.

Most interesting article. My first computer was a TRS80 model 1 and I remember many good times learning how to use that machine. I recently came across your emulator and I’m reliving some of those good memories. Keep up the good work.

I didn’t even know until I saw your article that today was the TRS-80s anniversary. I credit my TRS-80 for getting me to where I am today (working in the computer industry). People who weren’t there will never realize what a revolutionary idea it was to be able to go into a big established store like Radio Shack, pay out a lot but not too much money, and walk out with an actual computer. Back then computers were huge things that you had to pay to use. Your article was very interesting. I thought I knew the history but I had never even heard a lot of the information that was in there. Thanks for this site too, I can’t tell you how much time I’ve spent reading and enjoying your articles.

My husband (now deceased) worked in that Radio Shack factory that produced the first TRS-80 computers so he was actually in on the introduction of that machine. We had one of the early TRS-80 computers and I remember how proud my husband always was of that computer and that product line. Thank you for writing about this and for preserving the history of what happened 35 years ago.

Great article and very interesting site. I’m just starting to get acquainted with my “new” TRS-80 Model 4. I bought it for $5 from a yard sale. It came with a shoebox of disks and a couple of quick reference cards but no manuals. I have used your emulator for over a year now so I felt pretty comfortable with this Model 4.

Just as DEC invented interactive computing and brought affordable computers into the mainstream academic and every day corporate world, the TRS-80 bought affordable computers into everyone’s home. Computers were wonderful and mysterious machines back then and working with them was exciting and pioneering. Anyone could create something exciting and new. That excitement is gone from computing now, but lives on amongst the vintage computer collector.

In 1978 I started a new business, selling software for the TRS-80 Model I. The software was designed for the aluminum extrusion industry. The business is now 34 years old, and going strong. We stayed with Radio Shack for many years — Model II, Model 16, Tandy 3000 then 4000; and moved with Tandy from TRSDOS to Xenix. At one point I was president of the Tandy Business Users Group (T-BUG) and introduced Bill Gates as the featured speaker at our annual conference in Ft. Worth.

I have to credit Tandy with a good part of the sucess of my business.

Well this is a throwback… I became interested when hp had come out with a “programmable calculator” and I wanted one for my business to accomplish repetitive calculations. I credit that and Radio Shack for making computerization a doable thing in the late 1970’s. I ended up purchasing a computer running CPM with an 8080 buss, 128K of memory, (2) 128k 8″ floppy drives single-sided, single-density. Cost me $12,000.00 at the time. Anticipated with baited breath CPM developing a multi-user MPM. I still have the original computer and someday may spark it up just for the hell of it.

Well this is a throwback… I became interested when hp had come out with a “programmable calculator” and I wanted one for my business to accomplish repetitive calculations. I credit that and Radio Shack for making computerization a doable thing in the late 1970’s. I ended up purchasing a computer running CPM with an 8080 buss, 128K of memory, (2) 128k 8" floppy drives single-sided, single-density. Cost me $12,000.00 at the time. Anticipated with baited breath CPM developing a multi-user MPM. I still have the original computer and someday may spark it up just for the hell of it.