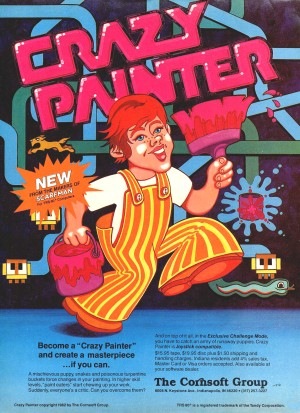 Cornsoft Group advertisement from the November 1982 issue of 80 Micro

The goal in Crazy Painter is to completely fill the screen using a paint roller. This is a lot harder than it sounds because various obstacles, including roaming dogs and snakes, show up to ruin what you have already painted and hinder your efforts. Unlike most other arcade style games at the time, Crazy Painter is completely non-violent (unless you consider painting to be violent).

To help explain the game, Crazy Painter has three pages of detailed (and animated) instructions. One nice feature is the ability to select from ten skill levels, and for each player in a two player game to have a different skill level. 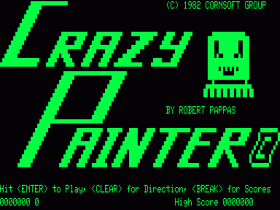 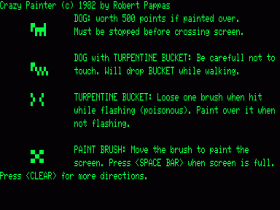 Here is a description of Crazy Painter from the documentation:

Suddenly everyone’s a critic in this frenzied game of paintus interruptus. As you rush to paint the screen, a mischievous puppy leaves tracks on your wet paint, you are chased by a snake while WILD and CRAZY PAINT EATERS lick up your hard work, all intent on stopping your progress. If that doesn’t make you want to throw down your paintbrush, wait until you hit a volatile turpentine bucket. Once you’ve sidestepped these obstacles, enter the EXCLUSIVE CHALLENGE STAGE! Here you must stop a barrage of CRAZY PAINTER characters until time runs out. CRAZY PAINTER presents a unique challenge that will keep your whole family slap happy for hours. 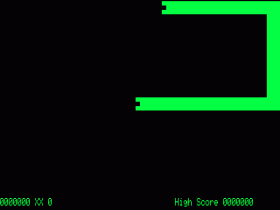 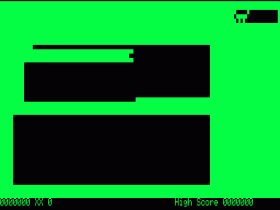 One important point to remember is that a completely painted screen isn’t automatically recognized: you need to press the SPACEBAR or the joystick FIRE button to register completion. 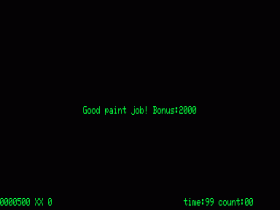 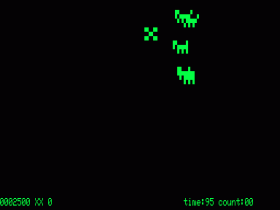 I have always liked Crazy Painter because it is such a change of pace from other games. Owen Linzmayer in Creative Computing described Crazy Painter as a “very professional program designed with user-friendliness in mind” and wrote that “Crazy Painter brightens up a TRS-80 software library just as a fresh coat of paint brings new life to a drab room.”

Congratulations on your work to rescue the memory of the golden years of the TRS-80.

Hey, does anyone have screenshots of Bounceoids? I have the old media, but no running TRS-80s anymore.