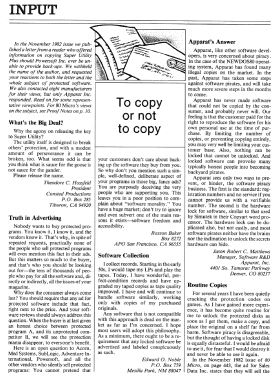 This included some cassettes, but most of the advanced protection schemes were reserved for disks. MED Systems Software, Acorn Software, Adventure International, and subLogic were among the companies that sold products on protected disks.

The November 1982 issue of 80 Micro contained a letter from a reader titled “To Copy or Not To Copy?”. In the letter, he offered to show how to break the Super Utility Plus protection, but only if and when PowerSoft went out of business:

A protected disk is only an aggravation until the company producing it turns belly-up and you can no longer buy a backup. Then it is a fraud.

One such product is the particularly sophisticated and excellent Super Utility Plus from PowerSoft Inc. It comes on one of the most locked-up of all locked disks, but its author has the audacity to include an unlocking routine for disks other than his own.

In the event that PowerSoft Inc. should go the way of Braniff Airlines1, I have devised a copying procedure for this valuable work that I will make available free for a stamped, self-addressed envelope. However, not wishing to rain on PowerSoft’s parade, I will not do so until they no longer make available their $5 copy.

Although the letter was published, the author’s name and address were not. The editors of 80 Micro were clearly uncomfortable with the idea, which could easily be construed as endorsing software piracy. They asked readers to write in about whether they should publish the name and address later, as they put it, “let you readers tell us what to do.”

They received more mail on this topic than any other in the history of the magazine. Although the majority of the respondents voted “Yes,” the editors still decided not to publish the name:

We agree with many of the comments made. Most readers would like to back up Super Utility Plus, and other software, only to guard their own interests. But we do not want to declare open season on the manufacturers of protected software. To do so, we feel, would only aggravate an already-volatile situation.

The February 1983 issue of 80 Micro included a special section containing a selection of reader letters on the subject. Most supported the original letter writer but some disagreed. 80 Micro kept publishing responses up to November 1983.

The April 1983 issue contained a multi-page response from PowerSoft. Among other things, PowerSoft pointed out that the Super Utility Plus package came not with one, but two program disks:

If you have two copies of Super Utility Plus, there is no reason to be concerned that you will be without it. You should keep one copy by your system, and another in a separate location for back-ups and master disks.

We can always repair a master disk at a nominal charge, and our turn-around time is fast. We have thousands of registered owners, and we believe that they are very happy with our product, and with our support and service.

Several readers pointed out that 80 Micro published advertisements for products claiming to be able to copy Super Utility Plus. Why, they wondered, was it okay to advertise such a program but not tell how to do it for free? This gave the impression, as one reader put it, that “Software piracy is okay as long as 80 Micro gets a cut of the profits.”

As it turned out, both PowerSoft and Super Utility Plus outlasted 80 Micro. It’s strange that, despite being the noted example of heavily protected software, the Super Utility Plus protection wasn’t all that hard to break. A savvy user could easily use memory tools — within Super Utility Plus itself — to dump a copy of the program to disk. Copying the disk directly was more difficult, but still quite doable for someone who understood how to program the disk controller.

This was probably the height of the TRS-80 copy protection debate, but the same issues of piracy and protection were hashed out again and again in later computer platforms and all the way to the present day.

I converted the SU4/4P to a file in one afternoon with very little effort. The key was the memory editor together with the RAM test function, which told you exactly which area of memory would be executed – and not overwritten – by SU…

Determining Super Utility’s memory boundaries with the memory test was a clever idea. It’s easy to see why PowerSoft took the dump memory commands out of Super Utility 4/4P. Of course, it was still pretty easy to make a backup even without those commands.

Because I read primarily Atari magazines (which had plenty of their own piracy discussions), I didn’t know about this discussion in 80 Micro. Great post.

You could copy SU with a program called “Trakcess” – and in turn “Trakcess” could only be copied with SU.

I forget where SU+ came into this, not sure what/if was done about copying that.