MULTIDOS advertisement from the November 1981 issue of 80 Microcomputing

The name MULTIDOS derived from its unique ability to read all Model I TRS-80 disk formats. As the manual stated:

One of the purposes of MULTIDOS is a link to all the Model I DOS’s on the market. MULTIDOS will permit you to read/write/copy to/from any Model I single/double density operating system configured as purchased. (NEWDOS80/2.0 double density data diskettes can only be read.) MULTIDOS is capable of reading/writing/copying to/from several Model III operating systems diskettes. (NEWDOS/2.0 and TRSDOS are excluded.) 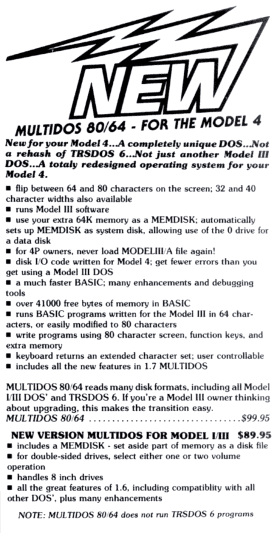 MULTIDOS was often described as a “programmer’s” operating system. One of the reasons was its speed (boot-up time was less than a second) and another was its excellent BASIC. MULTIDOS included an improved version of SUPERBASIC, the enhanced BASIC from ULTRADOS that had impressed so many people. As stated in one advertisement:

MULTIDOS has an excellent extended disk basic, SUPERBASIC, which has a super fast string sort and leaves the user with more than 40K (48K RAM) of free memory. What was sacrificed in obtaining the 40K—NOTHING! In fact, SUPERBASIC has several innovative and useful functions which the programmer/user will find invaluable.

Another useful included program was VFU, the Versatile File Utility, which allowed “multiple file copying, purging of files, printing a disk directory, and menu based execution of all programs on a disk.”

Later versions of MULTIDOS offered other advanced features, such as multiple commands on the same line (separated by commas) and flexible wildcards (such as */CMD or FILE?/*).

Unlike all other Model 4 operating systems, the Model 4 version of MULTIDOS was software compatible with Model III MULTIDOS. Even though it supported Model 4 features such as extra memory and the 80 by 24 screen, it was still software compatible because of the Model III ROM replacement included as part of MULTIDOS. In my experience, this meant that almost all Model III BASIC programs and most machine language programs (even games) would run under Model 4 MULTIDOS. MAX-80 MULTIDOS also offered compatibility with Model III software, although not to the same level due to MAX-80 hardware differences. Both Model 4 and MAX-80 MULTIDOS offered greatly enhanced versions of SUPERBASIC, with new features that used the increased memory available.

Because of its long development life, there were probably more releases of MULTIDOS than any other TRS-80 operating system. In addition to Z’DOS, a $39.95 stripped down version of MULTIDOS created for marketing purposes, there were versions of MULTIDOS for the Model I, Model III, Model 4, and Lobo MAX-80. Vernon Hester continued to make improvements to MULTIDOS and SUPERBASIC and release updated versions.

AlphaBit Communications became the primary distributor of MULTIDOS in 1984. They continued selling MULTIDOS until shutting down around 1994. After that, Computer News 80 sold MULTIDOS from 1996 to 1998.

The most recent version of MULTIDOS that Vernon Hester has released is MULTIDOS 6.0 in 2021.

I’m a great fan of Vernon Hester’s products, particularly Astrocal the supercalculator that emulates a Texas Instruments SR52 programmable. It runs on Multidos systems and very well using Matthew Reed’s TR32 Emulator on Windows, even in 64 bit systems . Of course there is little or no graphical output, but the numbers it produces using the many functions have ultimate precision; the programs I have prepared have my DWP420 turning out hundreds of yards of paper output.

Vernon’s manuals are masterly also in his prose skills. I have rarely seen such well thought out manuals and the quality of his English is superb. His software is enabling me to do things I could never have achieved otherwise.

I loved MULTIDOS the only one I used and I remember I lived close by the person who made it and I went there and in his house and bought it off him.

Just got my TRS-80 down and it works still but I forget the does commands. How it do other drives. So long ago know it so good.

My TRS-80 I took to Level IV to get fixed they replace the RAM and I called to when I would get it back I guess took them a month.

A little after that my 1st solder job a person showed me how to do it the RAM for Lower case. But it did not do lower case. I had to order a $40 chip from Radio Shack for it.

But have a good photo of high scores of Super Nova screen and the comma went below the other letters in that photo. So I know I had the lower case chip.

Level IV rip off the lower case chip from me! I only found out about that years later. I guess that’s why they had it so long to just replace the RAM. I did not know how back then but do now.