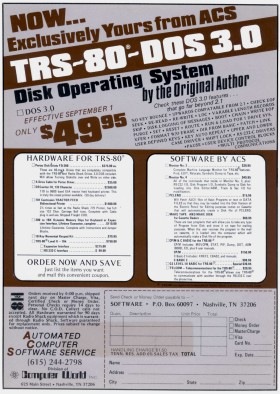 VTOS 3.0 advertisement from the November/December 1979 issue of 80-U.S. Journal

VTOS (which stands for “Virtual Technology’s Operating System”) was the second TRS-80 Model I operating system created by Randy Cook, the author of Model I TRSDOS. VTOS was released in 1979 and sold through Randy Cook’s company, Virtual Technology Inc. The original price was $49.95 for VTOS version 3.0. That was increased to $99.95 for version 4.0, or $125.00 for VTOS plus Operator’s Guide and Master Reference manual. There doesn’t appear to have been a Model III version of VTOS.

Randy Cook was the creator of Model I TRSDOS and sole author of all versions up to and including TRSDOS 2.1. After he parted company with them, Radio Shack developed TRSDOS 2.2 and TRSDOS 2.3 internally as patches to TRSDOS 2.1.

Randy Cook’s agreement with Radio Shack allowed him to maintain ownership of the code he wrote for TRSDOS. Cook heavily expanded this code and used it as the basis for VTOS 3.0. Although the advertisements described many operating systems as sharing “his design and code,” they said VTOS was the “only fully approved operating system by Randy Cook.”

There was no VTOS 1.0 or VTOS 2.0. VTOS started with version 3.0 because it was viewed as a continuation of TRSDOS 2.1. In fact, the earliest advertisements didn’t use the name VTOS, but identified it instead as “TRS-80 DOS 3.0 Disk Operating System by the Original Author.” They also emphasized the connection to TRSDOS 2.1 by stating “Check out these DOS 3.0 features that go far beyond 2.1.”

Randy Cook designed Model I TRSDOS with a powerful system of device independence, but much of that power remained hidden to the user. VTOS exposed device independence with commands such as ROUTE, LINK, and FILTER. Redirecting the printer to the screen is as simple as one command:

VTOS supported a wide range of hardware, including combinations of 8″ and 5¼″ floppy drives and Winchester (hard) drives, double-density using the Lobo LX-80 Expansion Interface or the Percom Doubler (with Double Zap II from Circle J Software), and even speed-up modifications such as the Archbold speedup board.

VTOS offered many other important features including a keystroke multiplier (KSM), job log, high memory management, and command line parameter parsing. Another valuable feature was the ability to save the entire system configuration using the SYSGEN command.

One of the most important innovations in VTOS was file dating. VTOS 4.0 was the first TRS-80 operating system to store the file date and that feature (and the directory dating scheme it used) became a standard. The earliest TRS-80 file date possible is 1980 because VTOS 4.0 was introduced that year. 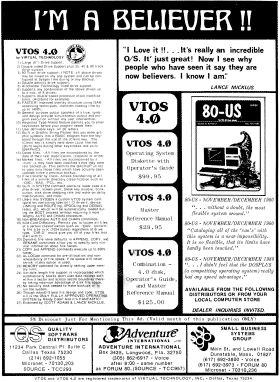 VTOS 4.0 advertisement from the January 1981 issue of 80 Microcomputing

VTOS was well-liked by many people (the advertisements boasted an endorsement by Lance Micklus and the “Scott Adams Seal of Approval”). One of the biggest problems VTOS faced was that it was the only copy protected TRS-80 operating system.

The protection scheme worked in an unusual way. The only use for the master VTOS disk was to generate working disks. A working disk behaved the same as the master disk with one exception: there was no way to back it up! Although designed to prevent casual piracy, copy protection had the unintended effect of driving potential users to NEWDOS. The backup restrictions were mostly removed in VTOS 4.0.

All of the major TRS-80 disk operating systems were based on TRSDOS 2.1 in some way. This meant that TRSDOS 2.1 and its disk format were the final point of complete compatibility among Model I operating systems. In particular, NEWDOS and VTOS diverged as their newly added features conflicted. The VTOS manual addressed this point with a warning:

Although VTOS uses a file structure which is upward compatible with TRSDOS, files written under NEWDOS are not guaranteed to be compatible with VTOS since several standards developed for TRSDOS were not maintained within NEWDOS.

VTOS 4.0 was the final version of VTOS, but the operating system and its features had a much larger impact in another form. VTOS was largely superseded by LDOS, another more successful operating system that was originally derived from the VTOS code.

I would love to get in contact with Randy Cook. Is that possible?

THANKS. That was a great era. i sure enjoyed it. jim

VTOS was such a OS, I was loving it. I tried to copy it as challenge, I succeded once, when I open and closed the disk drive while it did sound as if it had reading errors.

I believe to remember that the trick by Randy was to create defective sectors by a laser hole.

Copies did never have errors at that particular sector. That was how copies were identified