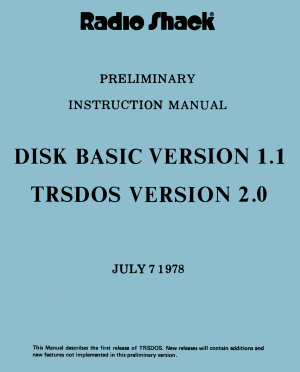 According to Randy Cook, he never intended TRSDOS 2.0 to be publicly released. It contained some truly awful bugs which he would have fixed before the final release. Perhaps the most famous bug was that writing to a full disk destroyed the disk! But the manual did clearly describe TRSDOS 2.0 as a preliminary version.

Even with its problems, TRSDOS 2.0 was a very powerful operating system. Almost all of the structure and most of the commands were already present. 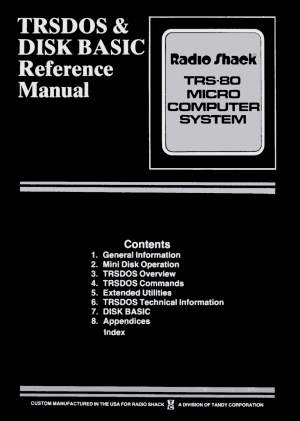 This was the first version of TRSDOS that most early users received. Most of the worst bugs were fixed and many important features and commands were added. It also had a professional manual which covered both TRSDOS and Disk BASIC.

Unfortunately, TRSDOS 2.1 still contained many bugs. In an odd twist, that very fact led to the creation of the TRS-80 alternative DOS market. A number of different people, attempting to fix those bugs, patched TRSDOS 2.1 and created their own custom versions. Some people sold their patched versions to other users. NEWDOS, ULTRADOS, and DOSPLUS all started as patches to TRSDOS 2.1.

Radio Shack and Randy Cook argued over ownership of the TRSDOS code after TRSDOS 2.1 was released. The dispute ended with Randy Cook parting ways with Radio Shack before finishing TRSDOS 2.2. His ideas for the next version instead went into his new operating system, VTOS 3.0. 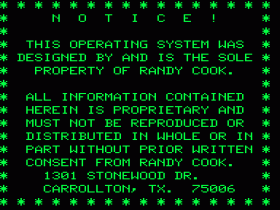 TRSDOS 2.2 was the first version of TRSDOS created by Radio Shack programmers, although stories differ about how much Randy Cook had already written before his departure. TRSDOS 2.2 corrected most of the bugs still left in TRSDOS 2.1, with only a few important ones remaining.

As an interested bit of trivia, Randy Cook embedded his own copyright message within TRSDOS and it was still present in TRSDOS 2.2. You could see it by typing BOOT/SYS.WHO at the command line and holding down the R and V keys (Randy Cook’s first two initials). 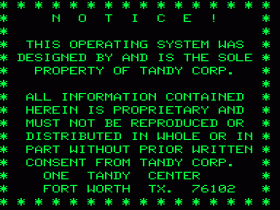 TRSDOS 2.3 was the final release of Model I TRSDOS, and probably the most widely used version. Other than some bug fixes, it appeared almost identical to TRSDOS 2.2. In fact, some people said that the only major difference between TRSDOS 2.2 and TRSDOS 2.3 was in the hidden copyright message. It was changed to delete Randy Cook’s name and address.

Despite the prevalence of third-party Model I double-density upgrades, TRSDOS 2.3 was never upgraded to support double-density. Almost all of Radio Shack’s Model I software was supplied on single-density TRSDOS 2.3 disks. 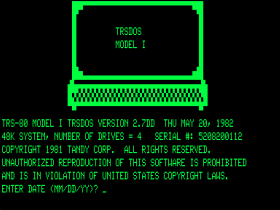 TRSDOS 2.7 was an oddity; a Model I operating system that resembled TRSDOS for the Model III. It was not an upgrade to TRSDOS 2.3, but a separate operating system. Like TRSDOS for the Model III, it was derived partially from TRSDOS for the Model II. It was released with the Radio Shack Double-Density Disk Kit, and was the only version of Model I TRSDOS to support double-density. It could read single-density Model I TRSDOS disks and run most Model I TRSDOS programs. Despite the similarities, it could not read double-density Model III TRSDOS disks or run Model III TRSDOS programs. Initially, it was the only operating system to support the Radio Shack doubler, but NEWDOS, DOSPLUS, MULTIDOS, and LDOS all added support soon after. Only a few Radio Shack programs came supplied on TRSDOS 2.7 disks, and it never became very popular. 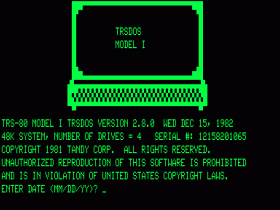 TRSDOS 2.8 fixed a major bug in TRSDOS 2.7 that affected single-drive copies from a single-density disk to a double-density disk. It replaced TRSDOS 2.7 as the operating system included with the Radio Shack Double-Density Disk Kit. TRSDOS 2.8 was available as a free exchange for current owners of TRSDOS 2.7, but that fact wasn’t very well publicized. Actually, the very existence of TRSDOS 2.8 wasn’t well known; many people reported having difficulty upgrading because the managers at their Radio Shack stores were unaware that an update had been released.

There was another version – *IF* I remember correctly, it was TRS-DOS 2.3B. We only saw it on disk software sold by R.S. – and it was majorly incompatible with any other TRS-80 OS. In fact, the only way I ever knew how to get software off of one of these disks was to use a pair BASIC programs (of all things) that RS had included for free called something like GETTAPE/BAS and PUTTAPE/BAS (exact names are fuzzy in my brain now…) – you could run PUTTAPE/BAS under the weird TRS-DOS to put the program you wanted to migrate onto cassette, then use GETTAPE/BAS running under the target OS! Goddess, I haven’t thought about this stuff in *years*!!