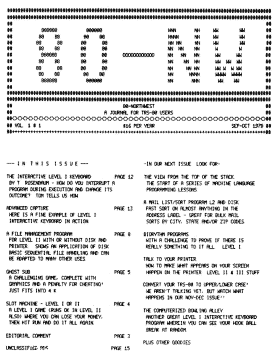 80-Northwest Journal (sometimes called 80-NW Journal) was first published in 1978 with the September/October issue. The founder of the magazine, Irvin “Mike” Schmidt, described the reason behind the new publication in the first issue:

What, another computer magazine?

Why not? We feel there is a real need for a vehicle to exchange TRS-80 information, one that is dedicated exclusively to the TRS-80.

The first issue was 16 pages long and was formatted and printed on a TRS-80 Model I with 48K of memory, two disk drives, and a line printer.

The Northwest in the title referred to the location of the publisher (Tacoma, Washington). But that soon changed, as stated in the November/December 1978 issue:

Those of you from other than the Northwest need no be intimidated by our “regional” heading. Since we have spread to almost all of the fifty states, there is already a new logo on the drawing board (actually, it’s on a mini disk), with a “US” replacing the “NW”. 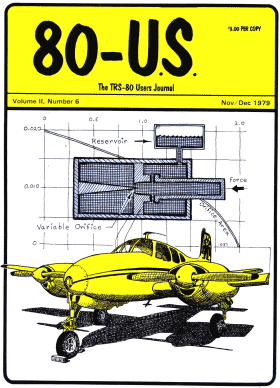 The articles in 80-U.S. Journal covered a wide range of topics. There were also several continuing columns, including:

In 1982, 80-U.S Journal increased their publishing schedule to every month. Unlike 80 Micro, its primary competitor, 80-U.S Journal never restricted coverage in the magazine to specific TRS-80 models. To the final issue, they covered all TRS-80 models, including the Color Computers, the Model 100, and the Model II/12/16. This was frequently given as the magazine’s focus:

We are a monthly magazine covering all models and aspects of the TRS-80 microcomputers. Each issue contains a mix of articles and programs for every level of expertise in the computing field.

We have regular columns and departments to help both the beginning Color Computerist and the advanced Model III assembly language programmer. We make a special effort to make our publication understandable to beginners and advanced computerists alike. 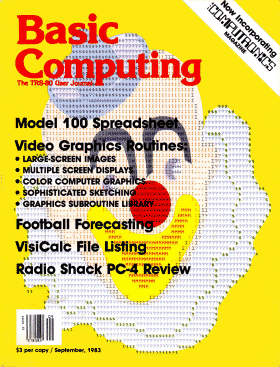 The name of the magazine changed again to Basic Computing with the July 1983 issue. The new name didn’t indicate a move away from the TRS-80; the motto remained the “TRS-80 User Journal.” The change away from 80-U.S Journal was made because the old name often led to it being mistaken for a travel magazine!

Basic Computing was printed on glossy paper and seemed to be actively targeting both new subscribers and newsstand distribution. In this period, Basic Computing absorbed several other TRS-80 magazines, including H&E Computronics and the LSI Journal. The added exposure led to a doubling in circulation in just one year. Despite that success (or perhaps because of it), Basic Computing abruptly ended with the March 1984 issue.

In many ways, 80-U.S. Journal reflected a different segment of the TRS-80 world than other magazines and I was sad to see it end. Although it never matched 80 Micro in terms of subscribers or advertisers, it certainly matched it in the enthusiasm of its readers and authors.