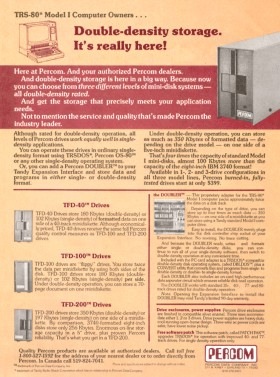 Percom advertisement from the November 1980 issue of 80 Microcomputing

The Percom Doubler was the first successful double-density add-on for the TRS-80 Model I. It was introduced in 1980 by Percom Data Company for an initial price of $219.95. The Doubler hardware was designed by Wayne Smith and Harold Mauch (president of Percom) and the accompanying software was written by Jim Stutsman.

The Radio Shack Expansion Interface, introduced in 1978, added floppy disk support to the TRS-80 Model I. The floppy disk controller used in the Expansion Interface could read and write in single-density, also known as FM (frequency modulation). Using single-density, up to 87K could be stored on a 35-track single-sided disk or 100K on a 40-track single-sided disk.

Most people at the time thought it would be impossible to support double-density on the Model I without adding one of two things:

But the Percom Doubler required neither of those things. It accomplished double-density instead using some very clever hardware and software techniques.

The Doubler installed inside of the Expansion Interface, in much the same fashion as the Percom Separator. It required no soldering or trace cutting, just removing the floppy disk controller (a Western Digital 1771), plugging it into the Doubler, and then plugging the Doubler into the empty socket.

The Doubler came bundled with DBLDOS, a version of TRSDOS modified by Jim Stutsman to support double-density. Percom also sold OS-80 (formerly known as MICRODOS) which could work with the Doubler. With the notable exception of Model I TRSDOS, Percom Doubler support was soon added to almost all TRS-80 operating systems.

The DBLDOS double-density routines written by Jim Stutsman are impressive. If you calculate the number of cycles required by a double-density disk transfer, it becomes clear that a Model I ought to be too slow for it to work. What Jim Stutsman did was to turn the approach of the routines around so that he gained just enough cycles to make it possible. The approach he used was copied (sometimes byte for byte!) by other operating systems.

After it was released, a small percentage of the Percom Doublers developed problems formatting the higher-numbered tracks on disks. In May 1981, Percom introduced the Doubler II, a redesigned version which featured a “ROM-programmed digital phased locked loop data separator.” The price for the Doubler II was reduced to $169.95 and Percom offered a $30 upgrade kit for purchasers of the original Doubler.

According to Harold Mauch, the new version was “more tolerant of differences from diskette to diskette and drive to drive” and also provided “immunity to performance degradation caused by circuit component aging.” He also said that “a Doubler II will operate just as reliably two years after it is installed as it will two days after installation.” The fact that many are still working nearly 40 years after they were installed bears out that assertion.

I have the original prototype of the doubler II in my barn.