The Archbold Speedup Board 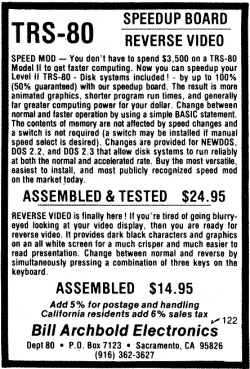 The TRS-80 Model I ran at a speed of 1.77 MHz. That speed was quite fast for a microcomputer at the time, but almost immediately people began designing speedup boards to increase it. The most famous of those speedup boards was the Archbold Speedup Board, designed by Bill Archbold and sold by Archbold Electronics.

The Archbold Speedup Board itself was a fairly small board (1.5" by 2.5"). It came with an instruction manual containing complete installation directions, including a photo of the Model I logic board. The exact installation procedure varied depending on the hardware installed but involved soldering wires to various points within the Model I and cutting a few traces.

One novel feature of the Archbold unit was that the speed could be software controlled (through I/O port 254) rather than using a hardware switch. That control scheme was copied by other speedup boards and became the de-facto standard for Model I speed control. Many programs, including Super Utility Plus, included code to automatically change the speed on the Archbold Speedup Board. It was also possible for users who wanted a manual switch to install one, but no switch was included with the Archbold package.

The original Archbold Speedup Board, introduced in 1979, cost $24.95 for a fully assembled and tested version and $18.95 for a kit version. It was guaranteed to increase the speed of the Model I by 50% or double it if the hardware could support it. Patches were included for TRSDOS and NEWDOS that automatically slowed down the Model I during disk accesses to improve reliability. There were no equivalent patches for cassette access and the Archbold Speedup Board needed to be manually slowed down before reading or writing a 500 baud cassette. Some people used the higher speed to read and write tapes with faster baud rates instead.

A later version of the Archbold Speedup Board, introduced in 1981, increased the price to $37.50. It was now guaranteed to double the Model I speed, but also provided a way to triple it to 5.3 MHz by replacing the Z80 processor with a Z80B and adding a delay line. That was faster than the much later TRS-80 Model 4, which ran at 4 MHz.

Patches to the operating system patches were no longer needed because the newer version automatically slowed down the Model I during disk and cassette accesses. This made the speedup almost completely transparent to the user. The automatic cassette slow down could be disabled by those people who wanted to continue using faster baud rates.

Also added was a keyboard power LED which indicated the TRS-80 speed by its color: