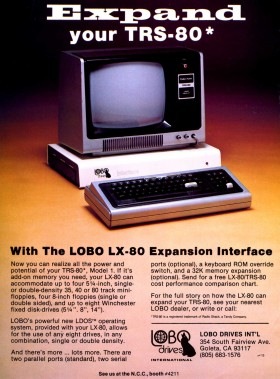 Lobo advertisement from the August 1981 issue of 80 Microcomputing

The LX-80 was an alternative to the Radio Shack Expansion Interface that took a different approach to compatibility than the competition. It was originally announced by Lobo Drives International in Fall of 1979, but problems with the supplied operating system meant that it wasn’t released until closer to 1981. The original price was $799.00 (without memory), although that price had been reduced to $510.00 by late 1982. Lobo Drives also briefly advertised the LX-50, but it is unclear how that differed from the LX-80.

The LX-80 unit was extremely solid (constructed of 1/8″ thick steel) and was designed to have the Model I monitor rest on top. Although more expensive than other Expansion Interfaces, the LX-80 provided an impressive set of features:

The LX-80 used “drive configuration switches” on the back of the unit to identify whether a drive was installed and what type of drive (5 1/4″, 8″, or hard) it was. The disk routines were contained in a special ROM within the unit, which also enabled the LX-80 to boot from a hard drive. Unfortunately, that ROM rendered the LX-80 incompatible with the Exatron Stringy Floppy.

The LX-80 addressed the floppy disk controller and serial ports in a completely different way from the Radio Shack Expansion Interface. Although this enabled improved features, the lack of compatibility meant that the usual operating systems, such as Model I TRSDOS, wouldn’t work with the LX-80.

The LX-80 came with LDOS, an operating system specifically developed by Lobo Drives for the LX-80. In fact, LDOS originally stood for Lobo Disk Operating System. It was derived from VTOS and the initial work was done by Randy Cook, the author of VTOS and Model I TRSDOS. The final version was written primarily by Roy Soltoff of MISOSYS and William Schroeder of Galactic Software. They started from the VTOS code base, but modified it heavily into a new operating system. Although LDOS was designed for the LX-80, it wasn’t specific to it and worked with other hardware. LDOS was soon spun off to a separate company, Logical Systems, and became one of the major TRS-80 operating systems.

Lobo Drives continued to sell the LX-80 until at least 1984. Many aspects of the LX-80 design were worked into their later TRS-80 compatible computer, the Lobo MAX-80.