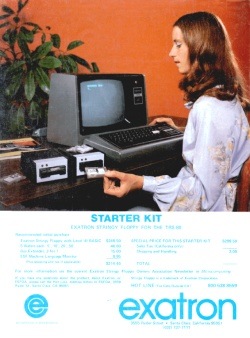 Exatron advertisement from the January 1980 issue of 80 Microcomputing

The Stringy Floppy was the only storage device other than floppy drives to achieve a degree of software support. Many programs, including games, were available on Stringy Floppy wafers. Some programs, such as Electric Pencil, had special Stringy Floppy versions. Jim Perry and later Spencer Hall wrote “@NEWS,” a column about the Stringy Floppy that ran in 80-U.S. Journal from the March/April 1980 issue to the January 1983 issue. 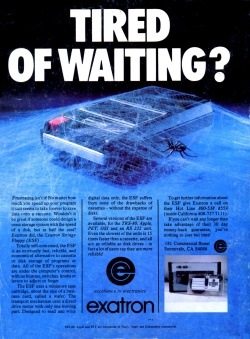 Exatron advertisement from the August 1981 issue of 80 Microcomputing

The Stringy Floppy transferred data at 7200 bits per second, over 14 times as fast as a Model I cassette. At that speed, a 16K file only took 24 seconds to load. The Stringy Floppy had the additional advantage over cassettes that the continuous loop wafers never needed to be rewound or positioned. The wafers were packaged in lengths which varied from 5 feet to 75 feet, with the wafer length determined the amount of storage. For instance, a 20 foot wafer could store 16K and a 50 foot wafer could store 48K.

I suspect that most Stringy Floppy users remember that sequence even today. The Stringy Floppy routines also debounced the Model I keyboard, although that useful feature was never really advertised. 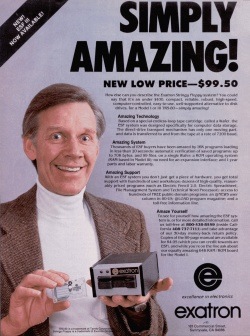 Exatron advertisement from the November 1982 issue of 80 Micro

The Model III had no equivalent hole in its memory map, so a more roundabout method had to be used. The Model III Stringy Floppy also had a cassette tape connection and could emulate a cassette recorder. The Stringy Floppy routines could be loaded into the upper 4K of memory using a special wafer. The commands used were similar:

The special wafer could then be replaced and the Stringy Floppy would otherwise work just like it would on a Model I.

The best description of how the Stringy Floppy worked I ever saw was contained in an Exatron advertisement:

The ESF uses a miniature tape cartridge (called a “wafer”) as a data storage medium, about the size of a business card and 3/16th of an inch thick. The tape used inside the wafer is a special Mylar based Chrome Dioxide type, specially developed for digital applications. Wafers are available in several lengths, 5 feet being the smallest and capable of holding up to 4 thousand bytes of information – the 75-foot wafer is the largest available and can hold up to 64 thousand bytes of data. The wafers contain a single reel of the special tape connected as a continuous loop, the ends being spliced together with a piece of reflective tape. In operation the ESF drive unit pulls the tape from the center of the reel inside the wafer, causing the entire reel to rotate. Thus, the tape automatically winds itself around the outside of the reel at the same rate at which it is pulled from the center. This process is similar to that found in an 8-track cartridge. 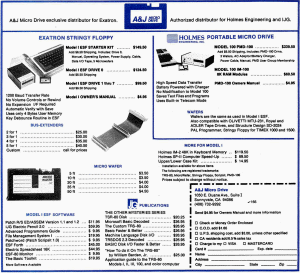 In 1983 as part of a reorganization, Exatron announced that it was changing its name to Entrepo (which means “storage” in French) and focusing on the many home computer companies that were interested in a low-cost storage device. It also shut down its mail-order business, although promising not to forget the estimated 5,000 to 10,000 TRS-80 Stringy Floppy owners.

The Exatron company stopped manufacturing the Stringy Floppy many years ago, but is still a prominent manufacturer of test equipment and one of the few major TRS-80 companies that still exists today.

I just stumbled on your site and it brought back many fond memories. I worked for many years with Bob Howell at Exatron on their Stringgy Floppy. I worked on a Digital Group interface initially and then on a Timex version. A the time I was an assembly programmer and wrote lots of code for this little device. For the Timex, I wrote a version of CP/M (I called ZCP/M as it was optimized for the Z-80). This was to be burned into a PROM and would sit in the 8-16k memory space (if I remember correctly). I got this to work (no small feat as the Timex system was a night mare to work with) but by this time the market was drying up and it never got released. I still have all of the code which is probably not of much use anymore. Those were incredibly fun times and it was a great group of people…

Just heard Exatron the current company owned by Robert Howell is now up for sale. It will probably sell for $500K.

The good and the bad:

Good, the ESF was fast and neat. And you could buy Bill Gates' Level III Basic on a wafer, which was really great. This was Microsoft’s very first consumer product.

Bad, the “endless loop” system was prone to tangling and, over time, read failures. Like 8-track tapes, I suppose. But way better than casettes for sure.

I still remember reading about this, but never saw or owned one. But who can forget “System /12345”?

I have one of these, yes still have, packed away with my TRS-80. I loved it. It was fast and dependable, unlike the tape recorder storage. It turned my TRS-80 from a toy to a useful computer. I learned basic on that machine. Today some 35 years I’m a Visual Basic software developer.

Quoting from the PREFACE of my 1981 book, “TRS-80 Assembly Language Made Simple,":

“This book was written with the aid of a TRS-80 Model I computer equipped with Level II BASIC and 16K RAM, a Centronics 730 printer with Radio Shack Printer Interface Cable (26-1411), an Exatron ‘Stringy Floppy’ and Duncan Pittman’s ‘Type Right Secretary’ word-processing program.”

…so MANY years ago!