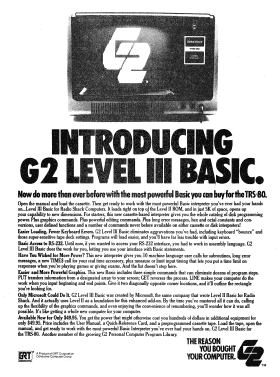 In 1975, Microsoft wrote Altair BASIC, the first BASIC interpreter for a microcomputer. Since then, Microsoft-written BASIC’s have become the virtual standard of the personal computing industry.

Microsoft has a reputation for quality, advanced programming techniques and efficiency that is surpassed by none. Level III BASIC was written by Microsoft president, Bill Gates.

Level III BASIC added many different types of commands, including:

Another nice Level III BASIC feature was “Shift-Key Entries,” 26 shortcut keys invoked by pressing SHIFT plus a letter key. The command shortcuts, up to 15 characters long, could be changed by using the LSET command.

These shared features were probably Level III BASIC’s biggest problem. Level III BASIC wasn’t compatible with Disk BASIC and there never was a disk version. They both served much the same purpose, yet the two systems weren’t compatible. The Level III cassette did include a special version designed to work under TRSDOS, but lacking any disk commands. Level III BASIC was also one of the few programs to be sold in an Exatron Stringy Floppy version.

Yes, I used to use Level III BASIC when all I had was a Stringy Floppy pre: disk drives. It was a nice piece of software. From memory it WAS the stringy floppy version. All that remains with me from those days is the cassette version unfortunately.

I bought Level III Basic with my video genie. I found level III to be nice but slow. I could calculate and poke graphics in regular basic faster. So I never used it much. Floppy made it completely obsolete and I was happy I never used it much. Some old L3 programs I made was on cassette and has been converted to cas but are not interesting…