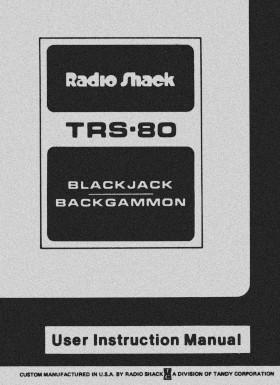 By 1979, the TRS-80 Model I was regarded as having the largest software library of any microcomputer on the market. But when the Model I was introduced in 1977, it had only five pieces of software available1. Only one of those was bundled with the computer: Blackjack/Backgammon, also known as Game Package.2 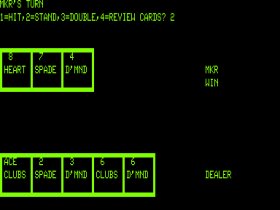 There are two games on the Blackjack/Backgammon cassette: Blackjack and Backgammon. They are written in Level I BASIC and are small enough to fit in a 4K Level I system. Both are surprisingly fun games, especially considering their small size. (A later 1980 catalog described them as “Fast paced fun!")

Blackjack plays with standard Las Vegas rules, the only exception being that there are no splits. You can choose one or two players (plus the computer) and use one or two decks of cards. Place your bets, and then the computer will automatically deal the cards – it even pauses to “reshuffle” when all the cards have been dealt. You can find out which cards have been played so far in the deck(s) before deciding whether to stand with your cards or draw. At the end of a hand, each player’s total winnings (or losings) are displayed. It’s almost like having your own casino.

Here is their description of Backgammon:

In backgammon, two players challenge each other on a graphic backgammon board displayed on the computer’s video screen. The pieces are moved around the board on numbered spaces by using the commands “from__” and “to__”. “Dice” are rolled randomly by the computer, and of course you always get four moves when you roll doubles – just like playing on a regular board. 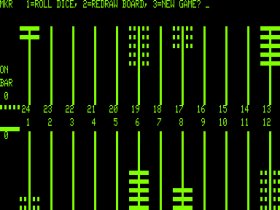 When Radio Shack introduced Level II BASIC in March 1978, they revised the games to work in Level II BASIC. New Model I Level II computers came with the revised Blackjack/Backgammon (catalog number 26-1803), but it could still be bought separately for $4.95. Radio Shack also included it as part of their $120.00 Level II upgrade for existing computers.