The File Cabinet was started in 1987 by Tim Sewell, a sysop of the Tandy RoundTable1 on the GEnie online service. It began as Sewell’s collection of TRS-80 files submitted to GEnie and that he had downloaded from BBS’s around the country. He described the File Cabinet as a “hobby that I enjoy doing” in the November 1989 issue of Computer News 80:

The File Cabinet was created out of a love for this computer and the chance through magazines who believed in my project to get software into the hands of the people who don’t have access to or use a modem to call BBS systems. According to the survey I sent out several months ago (another project I could complete if I made my living from The File Cabinet) only 10 percent of the people who answered the survey OWNED a modem. And you know what… only 1 percent of that group actually USE their modem! Shareware authors love The File Cabinet because their software is getting into the hands of more people than the BBS systems could ever service. 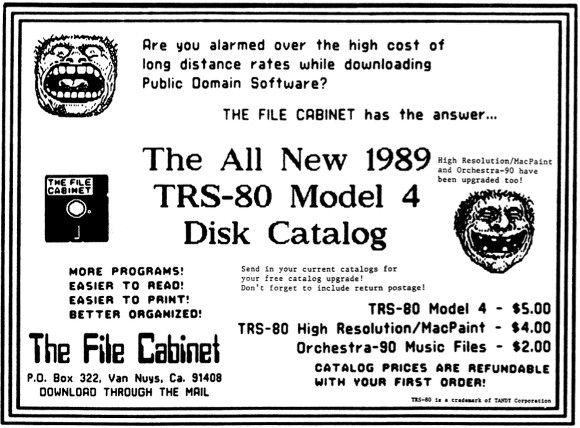 The first File Cabinet collection was of Model 4 programs, divided into five categories: utility, business, communication, education, and games. This was followed by collections of Orchestra-90 song files, MacPaint and high-resolution images, and Model I/III programs. Catalogs for File Cabinet collections were available on disk for $2.00 to $5.00 (depending on the collection), with the purchase price refundable on the first order. Disks were sold on a discounted basis based on the quantity:

Here is an description of the File Cabinet from an early advertisement in TRSLink:

Over the years, the File Cabinet has collected TRS-80 software from all over the country. The programs have been checked, sorted, and cataloged into one of the best collections of TRS-80 Public Domain software you will find.

Each disk in the library is filled to near capacity with quality software for your TRS-80 computer that would take months to collect IF YOU COULD FIND THEM! 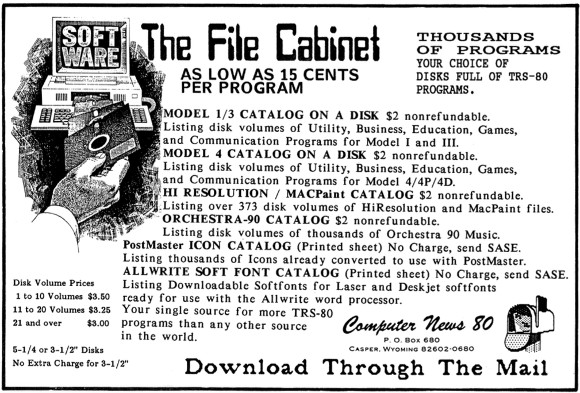 In 1989, Construction News Publishing (the parent company of Computer News 80 magazine) purchased the File Cabinet from Tim Sewell. They continued to expand the collection, offering the same four File Cabinet catalogs2 on disk for $2.00 each (but no longer refundable on first order). They changed the price structure slightly:

In 1990, Computer News 80 obtained rights from John Lancione to distribute Montezuma Micro’s CP/M public domain library. Although not strictly part of the File Cabinet collection, they were frequently mentioned together.

Boy, does this bring back memories. However, I never heard of The File Cabinet. I guess by 1987, I had pretty much abandoned my TRS-80 Models II and III.

In my TRS-80 days between 1980 to 1988, I bought all of my software from Radio Shack or thru ads in the many TRS-80 magazines (mainly Softside and 80 Micro). I wish I had run across The FIle Cabinet because I loved to try new software, but the retail prices were such that only really needed software could be purchased. I also only used the modem sparingly, mainly for software updates, so having the shareware available on floppies was a great idea.

When I say this brings back memories, I refer to the MSDos shareware catalogs that I received after 1988, mainly from The Software Labs and Public Brand Software. I just loved to peruse these catalogs. I could spend entire evenings deciding what to buy and generally would order 10-15 disks from each catalog. I still have all the shareware disks that I ordered and have archived all to CDs. It was thru these catalogs that I discovered Apogee Software and all their great titles (Commander Keen, Duke Nukem, and Crystal Caves to just name a few). I also was able to sample a huge variety of Dos utilities, office, and graphic programs.

I miss those days of hard magazines and catalogs. Now, everything is on-line only. Although I guess it is more convenient, nothing beats browsing a magazine in your easy chair.