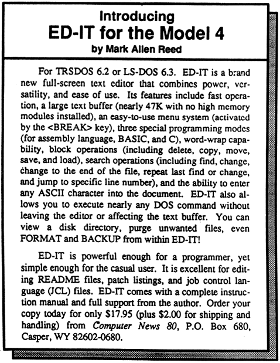 But ED-IT contains many useful features for programmers and is suitable for use with multiple programming languages or simple word processing. Despite its many features, it has one of the largest text buffers of any Model 4 editor.1 As Harold J. Hendriks wrote in the January 1996 issue of Computer News 80:

Especially when combined with the command line editing utilities CMDEDIT and CMDSTORE (which were available separately in Mark Reed’s Model 4 Utility Disk), ED-IT made Model 4 programming a pleasure. In my opinion, it is the best text editor ever written for the Model 4.2 As David Goben wrote in his June 1993 review in Computer News 80:

If you do ANY file editing, you are wasting your time if you are not using ED-IT. This is a professional class program that is beyond any other text editor I have ever used. I can even use it as a mini word processor, as I am right now as I write this review. I also use it exclusively for building all my JCL, assembly, and C programs. This is a definite “must have”.

The different editing modes can be selected either from the command line or within ED-IT. The individual parameters, such as tab interval, can be changed independently from the menus.

One of the most distinctive features of ED-IT is its menuing system. The normal ED-IT screen displays just the text being edited. Pressing the BREAK key activates the ED-IT main menu, which displays on the bottom line of the screen. Commands are activated by pressing the first letter of the command. For example, the main menu is:

Pressing the F key will display the File menu on the bottom line. The File menu has further commands:

This makes it easy to use ED-IT without referring to the manual.

ED-IT also makes the best use of the Model 4 function keys of any editor I have tried:

Version 1.1 of ED-IT (released July 22, 1991) added printing support. ED-IT can print the current file with control of margins, headers, and footers. This is useful for printing out program listings.

One nice feature of ED-IT is the ability to insert arbitrary character values into a file by pressing CONTROL+C followed by the decimal value of the character. For example:

will insert the character corresponding to decimal 191 into the file.

Another nice feature is the ability to shell to LS-DOS to run a command. Unlike similar commands in some other programs, ED-IT temporarily saves itself in high memory to allow as much memory for the running program as possible.

As David Goben wrote in his review:

A person may wonder why they should go out and buy another editor when LS-DOS comes supplied with TED, which at first seems to be an adequate text editor. To understand why, just use ED-IT once, and the next DOS command you will enter will be REMOVE TED/CMD.

I used (and still use) ED-IT for all of my Model 4 development.

I remember this program! I used it all the time when I was doing a lot of work on the Model 4 during the early 90s. The best thing about it was that it was fast and the text buffer was huge (at least by the standards of the time). Thanks for bringing back all these old memories. When I read your site I remember how much fun I had learning and doing back then. I wish Windows were half as much fun today!

Sometimes when people hear that I still have a real TRS-80 they ask me “Do you ever use it?” Yes I still use it, not as my main machine anymore, but on a regular basis. I bought ED-IT back when it came out and have used it ever since. I actually used it yesterday when I was editing some Mod 4 files in your emulator, and I use it on my “real” machine (128K with 2 360K drives) too. It does the job and doesn’t get in my way doing it. I wish there was a Windows version of it (I’d use it).

My 3 favorite Model 4 programs were PRO-WAM, LeScript, and ED-IT. I felt like I was using a really powerful PC with these 3 tools (and others too) installed. They didn’t crash all the time, they did what they were supposed to do, and they didn’t need to be updated once a day to patch security holes. Sometimes I look at the system I’m using in 2016 and I wonder how far we’ve actually come.