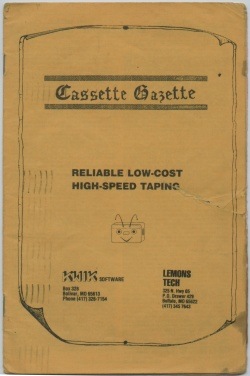 The front of the Cassette Gazette

Back in 1983, Lemons Tech and KWIK Software advertised a one issue joint newsletter named the Cassette Gazette. The Cassette Gazette described the products sold by the two companies, mixed with operational advice and interesting facts about using cassettes with the TRS-80. It appears to have been written by Wayne Lemons, the founder of Lemons Tech. I received my copy back in 1983, and it has always been a favorite of mine.

Today, it’s easy to forget just how expensive microcomputer storage used to be. For example, in 1983 Radio Shack charged $799.00 for the first Model III floppy drive, including the floppy controller and TRSDOS. A second drive cost less, only $349.00. Neither price included the required installation fee.

Media were also expensive. Radio Shack charged $4.95 for a single 5 1/4" disk or $39.95 for a pack of ten. Prices from other vendors were lower, but floppy drives remained a costly proposition, out of the reach of many TRS-80 owners.

But at the same time, Radio Shack was selling their CCR-81 cassette recorder for only $59.95 and their cassette tape prices started at $1.79. Cassettes remained an economical storage option for TRS-80 owners.

I recently received permission from the relatives of Wayne Lemons to put the Cassette Gazette here on TRS-80.org. Sadly, time has not been kind to my copy. Its fourteen pages of very thin colored paper have badly degraded, making a readable scan next to impossible.

Since scanning wasn’t a possibility, I decided to type it in myself, preserving the formatting wherever possible. So here is the complete Cassette Gazette, presented for your enjoyment.