Why the Gazette? – The Cassette Gazette Page 1 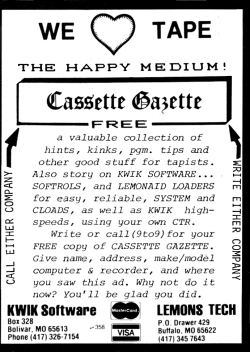 Advertisement from the April 1983 issue of 80 Micro

From the many questions we have been asked about cassette tape operations, we have found that many people share the same misunderstandings. We assume that this is because much misinformation has been written on the subject over the years. (And, unfortunately, more is still being written.) We suggest that you take anything you read or hear about taping with a grain of salt (even what’s in the Gazette), until you have checked it for yourself.

The idea of the ‘GAZETTE' is to pass on to you what we think is correct and useful information based on our experiences. Of course, we also take the opportunity to describe our product lines.

Keep in mind that all cassette recorders and computers are not created equal, and you may well have special problems that will take special solutions. Don’t hesitate to write or call… we’ll be glad to help in any way we can.

Judging from the editors and authors, it is easy to think that the whole world is disk-oriented (disoriented?). But not everyone needs disk… in fact, many computerists would settle for just a GOOD tape storage system. Even a slow 600 baud transfer rate can be tolerated, if it’s RELIABLE.

Cassette has the advantage of storing more bytes per dollar than any other media. Also it’s simple, rugged, low-cost, long-lasting, and is already supported by most resident operating systems (in ROM).

But the CTR has gained a reputation of being slow and unreliable, and is generally referred to as something we must force ourselves to temporarily tolerate. (As a result, we tape-based computerists are usually made to feel like poor cousins.) True, many tape users have found it exasperating and frustrating to use an audio cassette tape recorder (CTR) for program storage. In fact, many have ‘upgraded' to di$k only to escape from tape, not because they needed the additional DOS capabilities.

But with the TRS-80, the cassette has been taking a bum rap… it’s not the root cause of the problems. The standard CTR can be fast, reliable, and convenient, if it is given proper support. The LemonAid loader cures the ills and chills of loading from tape, and KWIK software adds speed and convenience with no loss in reliability. Although neither requires the other, the hardware and software combine into an unbeatable and low-cost taping team… a team that makes taping a pleasant experience.

There are other alternate storage systems available that are less expensive than di$k. But these add both hardware and software to the system, and are still relatively expensive. Worse yet, any trouble in the special hardware or interface puts you back to a plain cassette capability, and without the interface you can’t access anything on the special storage media with your perfectly good bare-bones computer.

Some time ago we received the following unsolicited letter, and it may show the feelings of the typical tape-oriented computerist:

Kwik Software,
I would like a free copy of the CASSETTE GAZETTE. I am sick and tired of everyone picking on us cassette people. Everytime I see an ad for some new game or utility exclusively on disk it makes me sick. I am happy to see someone still cares about the computerists who use tape to file their media.
Thank you.
Sincerely,
C.F.P
Gillette, N.J.

We can’t help but agree… especially after the fruitless search through all of the monthly magazines for tape oriented material.

We try not to be paranoid, but when you observe the pages and pages devoted to the various DOSs and di$k oriented programs, it seems that a ‘cone of silence' has been lowered over tape-related products. You may see a tape-related ‘product announcement' we submit (it makes a nice short “filler”)… but how often a full-blown review?

This is partly due to two facts… there is not yet a truly professional quality tape-based word processor, and di$k is admittedly much faster and more convenient than tape. So probably ALL authors (ergo, ‘reviewers') who use a micro have a di$k system… and di$k users quickly become spoiled. Few are going to volunteer to dig the CTR out of the hall closet to review a tape-only product, even if they do happen to know enough about tape and taping needs to do a decent evaluation.

Meanwhile, back at the ranch, the editors join in the rush to be the most up-to-date, to savor the sophisticated, explain the exotic, and appeal to the avant-garde… with an eye toward ‘new' subscribers. People like us, the old-guard cadre of tape users, have faded from memory… and we are the original subscribers who got the magazine off and running in the first place.

But it doesn’t have any effect when we gripe… being in business and 100% tape oriented, our complaints are taken as merely self-serving efforts to push our products. By the same token, micro manufacturers aren’t going to push tape… there’s profit in di$k, not cassette.

So there isn’t necessarily a conspiracy against tape… editors and authors provide what they think the readers want, and the squeaky wheels get the grease. But there are untold thousands of you silent “tapers”, and the only way you’ll ever get the support you deserve is to scream at the editors… let them know your needs and interests, that you have no need for a 400 page di$k-oriented catalog… and the reason why you did not renew your subscription. (You can bet that someone will be interested in that last silent detail!)

Or you can remain silent and watch tape support die out completely… while you save up for di$k.

Why doesn’t someone organize a world-wide Tape-Based User Group (“TBUG” ??). It just would not be appropriate for us to do this… but we could provide a mailing list of tape users to the initiators, and would of course join as charter members and contribute in every way possible.

What Is A Loader? – The Cassette Gazette Page 5

My CTR80 cassette recorder went to the electronics recycler yesterday (6 Feb 2013). I got it when I bought my Model 1 TRS-80 in early 1978, and hadn’t used it since 1979. It was well made but awful for data reliability. I was really glad to upgrade to floppies despite their cost.