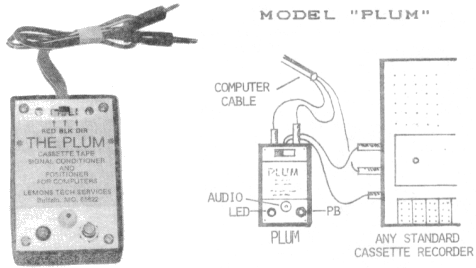 Actual size of PLUM is 3 x 2 x 1. Takes about 20 seconds to install. No rewiring. No soldering. Just plug between computer cable and CTR as shown and it’s ready to go. SYSTEMs or CLOADs commercial or self-saved tapes without volume juggling. Push-button advances tape in PLAY or RECORD without plug pulling. Built-in audio for easy finding of programs and for hearing the ‘action' from the tape. No dangling line cords. Automatic on-off ensures long, long battery life. Snap-in replacement is standard AA cell. Comes with battery installed and ready to use. Order now.

No bells or whistles, but cleans up the signal for both regular and KWIK loading. Sometimes not as convenient to use as other loaders, since for some pre-recorded tapes the computer plug must be moved to another output plug on the loader.

Excellent loader for Model I when using a CTR80 or CTR80A recorder. It has a “load-mode” switch for selecting correct output for easy loading of both self-saved and pre-recorded tapes. Built-in audio monitoring lets you hear save/load “action” plus makes it a snap to locate the beginning of programs. Eliminates CTR volume juggling and erratic tape loading of the TRS-80 Model I or Model III low speed. Has bypass switch for Model III high speed loading. Signal-powered. No power supply needed. Install in 15 seconds. Use with CTR80 or 80A recorders, without modifications, but may be used with CTR41 or CCR81 by making simple solder-in modification to recorder. Instructions and parts included free on request with order.

Almost all portable audio cassette recorders use ‘Automatic Level Control' in RECORD… the volume control has no effect on the recording level.

This new PLUM loader/motor controller, our most sensitive loader was designed to operate with most Radio Shack and other recorders without modifications to the CTR. Loader is compatible with Model I, Model III, 4, 100 at all baud rates as well as with KWIK high speed software. Instructions are included for making CTR-to-CTR program copies as well.

The CTR ‘erases' your tape more than one-half second (1 inch) AHEAD of where it is recording.

Which Loader For You? – The Cassette Gazette Page 11

How Tape is Made – The Cassette Gazette Page 10