Let's Get Our Heads Together – The Cassette Gazette Page 3

Let’s Get Our Heads Together

Although you may not know exactly what it means, you have probably heard of a “head adjustment” or “azimuth” setting. There is a very narrow gap (vertical slit) in the record head that records the signal on the magnetic (oxide) coating on the tape. Essentially, ‘azimuth' is the angle that this gap makes to the direction of the tape movement. (See Fig 1.) The ideal is for the gap to be aligned at exactly a right angle (90 degrees) in reference to the direction of tape movement.

A similar gap in the playback head picks up the signal for playback. It’s rather obvious that the performance would be best when the azimuth setting (‘angle') of the playback head exactly matches the azimuth setting of the recording head. The most important effect of an azimuth mismatch is a loss of high frequency response, and the ‘highs' are most critical for program tapes. (So if your CTR has a tone control, it should always be set to “treble” or “high” for loading.)

In the typical portable cassette tape recorder (CTR) the same head is used for both ‘record' and ‘play', so the playback and record azimuth are identical. Because of this your azimuth can be off considerably, yet cause no loading problems… as long as you load only from tapes that YOU have recorded. So for self-saved tapes, you can probably ignore the whole business of azimuth. (Note: An extremely misadjusted azimuth can cause you trouble even on your own tapes.)

However, you may not be able to load a program recorded by a CTR that has an azimuth setting different from yours. Obviously, the ideal situation would be for every recorder to have always had a correct head azimuth. Then there would be no ‘mismatches', and all tapes would load easier. But that didn’t happen, and loading alien tapes is usually a problem, even if your azimuth is right on. We have a collection of many commercial tapes from many major software houses. Some time ago, we tested each tape to check the azimuth used for recording its program. Sure enough… the settings varied significantly, with no two exactly the same.

But that’s not all. We also checked six new standard CTR-80s and various other CTRs, and found the same situation… no two heads were set to exactly the same azimuth. No wonder loads can get frustrating! But all this is not surprising, since the CTRs were probably manufactured for audio use, in which case the precise azimuth settings might not be considered important.

Since we routinely align all our head azimuths with a ‘standard' test tape, we always have absolute compatibility between all CTRs used by both KWIK Software and Lemons Tech Services… from regular 500 baud to KWIK 3000 baud. If only, from the start, everyone had always given careful attention to the simple matter of correct head alignment, there would have been far fewer cassette problems. 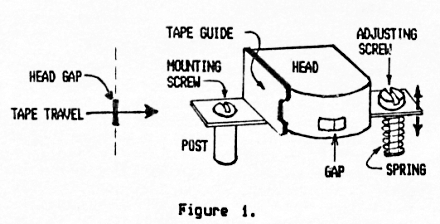 If you strongly suspect a poor azimuth setting then by all means you may want to attempt a correction. Remember, though, that if you have a number of tapes already recorded, it is possible an azimuth change may make them harder to load… not easier… since the playback azimuth will then be different from the record azimuth.

In most R/S CTRs the azimuth adjustment screw is accessible through the hole just above the trademark on the front panel, between the PLAY button and the cassette door. This is a small hole and you will have to use a thin-bladed or jeweler’s screwdriver to reach the screw. The screw moves under the hole, as we might expect, only when the PLAY button is depressed and the tape head is contacting the tape. As seen in Fig. 1, the screw and coil spring combination can move one side of the head up or down, changing the angle between the head and the tape (azimuth).

In other CTRs you may have to open the case (not for novices) to get to the azimuth adjustment. Making a hole to reach the screw may be possible, but we urge extreme caution… you can easily damage the mechanism or head.

The best way to set azimuth is with a standard test tape and an oscilloscope, observing the peak output level as you make the adjustment. (You can use any KWIK tape as a secondary standard, since it is recorded at the correct head azimuth. Keep in mind that it is not made expressly for this use and does not have the steady tone or tones of a commercial standard.)

You can also set the azimuth reasonably well by listening if you use the following method:

Is Your Belt Tight?

A slipping belt between your cassette motor and drive pulley can easily cause enough tape wow (fluctuation in speed) to bomb a load, and is a condition that requires immediate correction. This is really a double hazard… since the belt will also slip while recording, wow is permanently placed on any program you save. This can mean that even after curing the wow, you still may not be able to load any program you saved while your CTR was sick. A LemonAid loader will make your loads less sensitive to mild wow, but cannot compensate for severe cases.

This trouble should be expected only on older recorders. After enough use (usually several years) your CTR belt will have been stretched and flexed enough to begin slipping. How do you tell? Take off the bottom of the recorder, find the belt where it goes around the large drive pulley. Grasp the pulley and stop it from turning; this should stop the CTR motor too. If the motor keeps turning, you should replace the belt. Caution: Stop the motor only for an instant.

What Is A Loader? – The Cassette Gazette Page 5