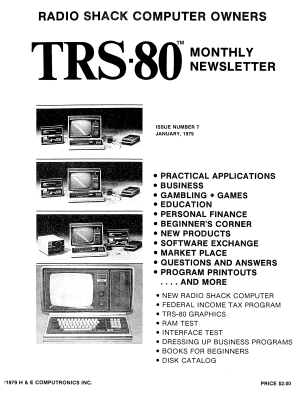 The first issue was published in July 1978 as TRS-80 Monthly Newsletter with this mission statement:

The purpose of the TRS-80 Monthly Newsletter is to provide and exchange information related to the care, use, and application of the TRS-80 computer system.

Created by publisher Howard Gosman, the TRS-80 Monthly Newsletter soon grew to become H&E Computronics Monthly News Magazine, a 70 page magazine. Despite being published by the H&E Computronics company, the magazine wasn’t an advertisement for their products (they had a catalog for that purpose). From the beginning, it contained a variety of articles, columns, reviews, and third-party advertising. 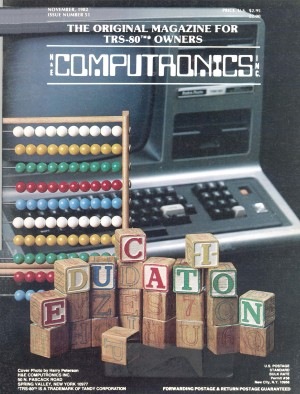 One of the more interesting columns was “The Crystal Ball,” which contained “news and rumors of interest to TRS-80 owners.” The rumors and predictions listed were sometimes right (predictions of the Model 16 were correct in almost every detail) and sometimes wrong (the Model III didn’t have an 80-column display). But they were always interesting reading and helped keep people thinking about what would be introduced next. I think it is safe to say that this column wasn’t a favorite of those at Radio Shack; on more than one occasion, they used the TRS-80 Microcomputer News to try to discredit rumors in the column.

Also popular were the columns by Hubert S. Howe, Jr., editor-in-chief of the magazine. His columns about assembly language programming on the Model I were later reworked into the book TRS-80 Assembly Language, which was published by Prentice Hill in 1981. “Model III Corner,” another one of his columns, delved into the Model III hardware in great detail.

Although H&E Computronics continued to sell their business software until at least the late 1980’s, H&E Computronics Magazine ended when it was merged into BASIC Computing magazine (formerly 80-U.S. Journal) beginning with the September 1983 issue.