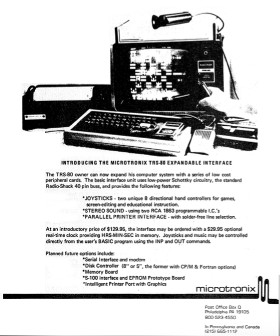 The product description in BYTE stated that “joysticks and music may be controlled directly from the user’s BASIC program using the INP and OUT commands.”

The Expandable Interface disappeared from Microtronix advertisements in late 1979, although it was probably still sold until at least 1980.