The significance of this limitation has been exaggerated over time (it’s worth noting that the contemporary Apple II also lacked lower case), but it created a real problem for word processors. There were many lower case upgrades for the Model I designed to fix the omission, ranging from simple to more complex.

Although the added CONTROL key was intended as an integral part of the modification, it was often omitted or sometimes just implemented as a push-button switch.

Unlike most other lower case modifications, the Electric Pencil modification required a toggle switch to enable and disable lower case. This was important because the modification was incompatible with Level II BASIC and needed to be disabled before using it. Those toggle switches were once a common site on Model I keyboards.

I have often been asked for details about how the Electric Pencil lower case modification was installed. To satisfy this historical curiosity, here are the complete instructions, as published in 1978 in the TRS-80 Electric Pencil manual.

To modify the TRS-80 for lower-case operation with The Electric Pencil, changes must be made to the screen display memory and to the keyboard. There are many ways to accomplish this modification and it is up to the user to determine the most satisfactory approach. The modification requires changes to the circuit boards within the keyboard enclosure of your TRS-80, thus your warranty will be voided by this modification. We have modified several computers ourselves and have had no difficulty with the TRS-80 after making the changes, however, WE CANNOT ACCEPT RESPONSIBILITY FOR DAMAGE TO YOUR COMPUTER CAUSED BY INSTALLATION OF THIS MODIFICATION! 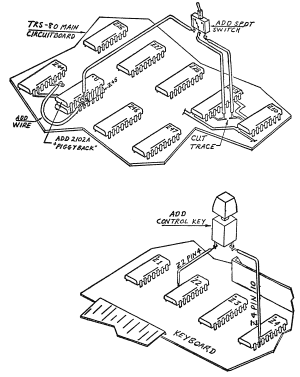 Figure on page 23 of the Electric Pencil manual

The TRS-80 video display uses a dedicated block of 1024 bytes of memory located in memory space at 3C00 Hex. When received from the factory, there are only 7 memory chips installed in this block of memory, providing 128 possible characters for screen display. The stock TRS-80 uses 64 of these combinations for graphics and a second 64 for the upper-case subset of the ASCII character set. Bits 0-5 control the character selection, and the highest bit (bit 7) is used to determine if the character is alpha-numeric or graphic. Bit 6 is missing!

To add lower-case display, bit 6 must be implemented. This may be accomplished by switching the memory chip for bit 7 to bit 6, thereby enabling lower-case letters and eliminating graphics, or by addition of an 8th memory chip. We prefer adding the extra chip. In either case, if you plan to use Level II BASIC, you must include a switch to disable bit 6, or BASIC will place a lot of funny characters on the screen!

Refer to the top portion of the figure on page 23. A low-power 2102A memory chip (available at most electronic stores) is piggy-backed onto an existing 2102A, and appropriate connections are made. Take a new 2102A, carefully bend pins 11 and 12 up from their normal position, then slide the chip down over the 2102 located at position Z45 on the larger of the two TRS-80 circuit boards (the Z-number is printed on the circuit board next to each chip). Be sure that the chip is oriented to place pin 1 on top of pin 1! When all pins are aligned and contacting (except 11 and 12, of course), carefully solder each of the 14 pins from the added chip to the chip on the circuit board. Work quickly but be sure you get a good solder joint! Now, connect a small piece of insulated wire (wire-wrap wire is ideal) to pin 11. Locate pin 13 on chip Z44, and attach the other end of the wire to the pad which is connected to this pin.

Between chips Z29 and Z30 there are three traces, two wide and one narrow. Cut the narrow trace with a sharp knife. Attach two pieced of insulated wire to each of the cut ends of this trace, and a third piece to pin 12 of the added memory chip. Run these three wires to a single-pole double-throw switch as shown in the diagram. This switch changes the screen memory from the original 7-bit configuration to the new 8-bit configuration, thus allowing you to switch and forth between BASIC and The Electric Pencil.

One change must be made to the keyboard; a CONTROL key must be added. It is possible to isolate and use one of the present keyboard keys (such as the down-arrow) as a CONTROL key, but we recommend adding another key.

Install your new CONTROL key, or isolate one of the existing keys by cutting the traces on the keyboard circuit board. Locate Z2 and Z4 on the lower-left of the circuit board. Attach wires to pin 4 of Z2 and pin 10 of Z4 (these wired may be attached to the top or bottom of the circuit board, as desired). Attach the other ends of these wires to the CONTROL key. Be sure you leave enough slack in the wires to allow re-assembly of your computer. This completes installation of the lower-case modification.

IMPORTANT: There are at least two different keyboards used on the TRS-80 computer. One of these is green and has traces on both sides of the board, while the other is tan and has printed traces on only one side. If you have the tan board, you may have to attach one of the control key wires to chip Z2 Pin 10 instead of Z2 pin 4. This may be verified by tracing either of the above pins to the SHIFT key. Attach the wire to the same pin that connects to the SHIFT key.

Thanks for this detailed writeup! I bought a TRS-80 in early 1978 to use for word processing with Electric Pencil, and had to install the mod to produce clean copy for magazine articles and equipment reviews. My collaborator and I each had a system, and we swapped files using the cassette interface. We soon tired of this and bought the expansion unit kit, which added more memory and diskette drive capability. We narrowly escaped being defrauded by the World Power Systems scam!

Our output was on a Centronics 9-pin matrix printer, and we weren’t very happy with the quality. I bought one of the surplus IBM Selectric airline reservation terminals that were then available for $100 or so, and built an ASCII to EBCDIC interface from the information in Don Lancaster’s TV Typewriter Cookbook. We were then able to print at letter quality.

One interesting feature I included was a speed control. The Selectric was capable of about ten characters a second if properly maintained, but wasn’t always reliable at this rate, so a pot on the interface board allowed the speed to be increased until the typewriter misprinted, then backed off a little.

We used the TRS-80s until the IBM PC came along.

The Commodore PET family didn’t, which is one of the features that made it attractive as a serious business machine in Europe.