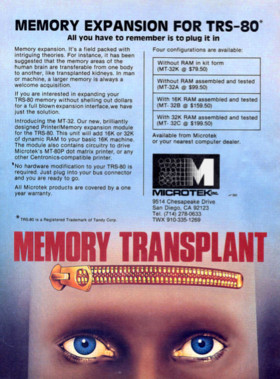 The MT-32 from Microtek, Inc.1 of San Diego, California used a different approach from the Radio Shack Expansion Interface. The MT-32, introduced in mid-1980, offered only two features: the ability to add 32K of RAM (for a total of 48K) and a parallel printer port.

The MT-32 was available in four configurations:

Those were substantial savings when compared to Radio Shack’s price for the Expansion Interface (at the time) of $299.00 without RAM and $597.00 with 32K RAM.

The MT-32 came in a grey aluminum case measuring 3" by 7" by 16 1/2". Like the Radio Shack Expansion Interface, the MT-32 was designed to sit underneath the Model I monitor. It attached to the Model I using a cable connected to the 40-pin expansion bus. The MT-32 manual estimated that installation should take only 60 seconds.

Unlike most other Expansion Interface alternatives, the MT-32 didn’t include an extender for the Model I 40-pin expansion bus. Any device that needed to connect to the Model I bus, such as the Exatron String Floppy or the MECA BETA-80, couldn’t be used at the same time as the MT-32.

Microtek, and their division Microtek Peripherals, sold many products for the Apple II, Atari, TRS-80, and (later) the IBM PC. They were also well-known for their inexpensive and popular Bytewriter printers. However, problems with excessive returns of Bytewriter printers led Microtek to declare Chapter 11 bankruptcy in August 1982.

They appear to have stopped selling the MT-32 and their other TRS-80 products around that time. Microtek continued to sell Apple II and IBM PC products until at least 1985.