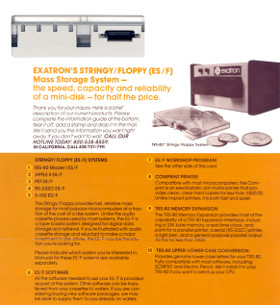 Exatron flyer from 1981 mentioning the MM+

The Exatron MM+ measured 17" by 7" by 3" and cost $399.00. It was only sold by Exatron fully assembled, unlike most other Expansion Interface alternatives, such as the Micromint Disk 80 or the Microtek MT-32, which were also sold as kits.

The Exatron MM+ included its own power supply and offered these features:

The light pen port would work with any TRS-80-compatible light pen that connected to the cassette port. According to a review in Creative Computing, the port was designed to work with the $19.95 Photopoint light pen sold by Micro Matrix of Pacifica, California.

Exatron appears to have discontinued the MM+ by early 1982 when they introduced another product, the MM-800 Internal Memory. The MM-800 was a less expensive alternative that installed inside the Model I case and provided a full 64K of memory.