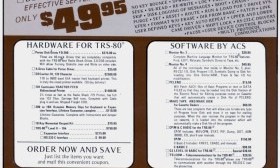 VTOS (which stood for “Virtual Technology’s Operating System”) was the second TRS-80 Model I operating system created by Randy Cook, the author of Model I TRSDOS. VTOS was released in 1979 and sold through Randy Cook’s company, Virtual Technology Inc. The original price was $49.95 for VTOS version 3.0. That was increased to $99.95 for version 4.0, or $125.00 for VTOS plus Operator’s Guide and Master Reference manual. There doesn’t appear to have been a Model III version of VTOS.

Wayne Westmoreland and Terry Gilman wrote some excellent games for the TRS-80 from 1981 to 1983, including Sea Dragon and Armored Patrol. In 1995, Wayne Westmoreland released all of those games into the public domain.

Here is a description, written by Wayne Westmoreland in 1995, for each of the games. 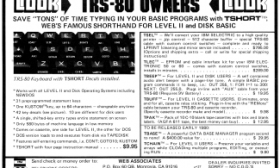 After upgrading their TRS-80 Model I to Level II BASIC, many people missed the “shorthand dialect” of Level I BASIC. TSHORT was a very popular keyboard macro utility for Level II BASIC that added a similar kind of shorthand for BASIC commands. It was written by Ron Wirth and released in 1979 by Web Associates for $9.95. (The name Web Associates was not a reference to the World Wide Web, which it predated by ten years.) TSHORT ran in high memory above BASIC and consumed only 580 bytes of memory. 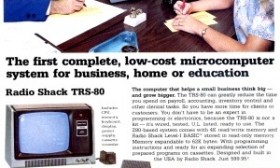 When the TRS-80 Model I was first released in 1977, the BASIC interpreter that Microsoft was writing, Level II BASIC, was still months away from completion. Instead the Model I originally shipped with a BASIC interpreter known as Level I BASIC.

Level I BASIC was based on “Palo Alto Tiny BASIC”, a 2K version of Tiny BASIC written by Dr. Li-Chen Wang for the May 1976 issue of Dr. Dobb’s Journal. Because Dr. Li Chen-Wang placed his BASIC in the public domain (he labeled it “@COPYLEFT; ALL WRONGS RESERVED”), Steve Leininger, the designer of the TRS-80, was able to use it as a starting point. He added floating point math, cassette, keyboard, and video routines, doubling the size of the original code to 4K. 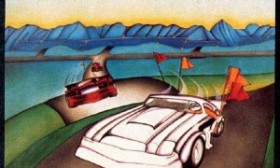 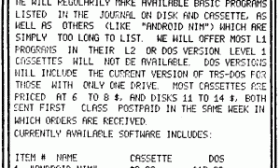